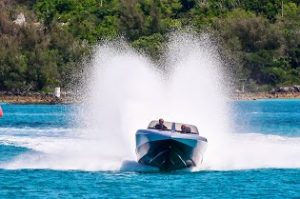 Tampa, Fla. – Aug. 26, 2013 – (Marine NewsWire) As Chris Fertig and Tyson Garvin raced across the Atlantic Ocean setting a new Bermuda Challenge speed record last week, their families, friends, followers and ground support staff were able to watch them on the Internet, thanks to specialized video software and hardware supplied by DigiGone®.

Fertig and Garvin made the run from New York City to Bermuda in 15 hours and 48 minutes, smashing the old record of 17 hours and 6 minutes, despite two stops in mid-ocean to replace broken propellers.

DigiGone provided a ruggedized waterproof computer and sophisticated video compression software to enable live video streaming from a camera focused on the boat’s cockpit through a satellite antenna. The video feed was run on the Bermuda Challenge website, along with a map display showing the boat’s latest position and status, updated every 10 minutes.

“The DigiGone software uses advanced compression and encryption techniques to transmit high-quality video over marine satellite channels using very little bandwidth, ” explained Michael Dunleavy, president and CEO of DigiGone. “Our engineering team was able to control from shore the video throughput between 200 and 130 kbps to maintain the best image quality under the dynamic conditions.”

“It was a great comfort to know that our first responders and ground support team had an eye on us along the way, ” said Fertig. “Importantly, the low bandwidth requirements of the DigiGone software allowed us to run the video feeds through a Fleet Broadband 250 ship terminal. This antenna rig is much smaller and lighter than higher-speed marine satellite terminals. Weight and drag are important issues when it comes to high-speed operations.”

“The Bermuda Challenge presents a tough testbed for the onboard equipment, and the rugged DigiGone video system performed superbly under the most difficult conditions imaginable, ” Fertig added. “At those speeds on the open ocean, the satellite antenna took a lot of pounding, but we never lost the video feed for more than very brief intervals.”

The satellite airtime for the video feed was provided by Marlink, a marine satellite services company.

Fertig and Garvin crossed the starting line at New York City at 7:41 a.m. Aug. 21, roaring into the Atlantic at 70 mph (60 knots). One of the twin propellers broke a blade about an hour later, and they stopped to replace it with one of their two spares. They reduced their speed to 55 mph (43 knots) for the next 10 hours to reduce wear and tear on the propellers. About 150 miles from Bermuda, the other propeller broke, and they were forced to make underwater repairs in the dark to replace it with their last remaining spare. They then powered the rest of the way into Bermuda’s Town Cut Channel at 40 mph (35 knots), arriving shortly past midnight (Bermuda time).

DigiGone video systems and software are used aboard ships at sea for applications such as videoconferencing, telemedicine, security and ship-to-shore crew welfare calling.

Based in Tampa, Fla., DigiGone is a software development and hardware integration company specializing in encrypted software-based communication and security solutions that are portable, easy to use and cost-effective. The DigiGone collaboration tool is used by U.S. and international military forces and government agencies, as well as global shipping companies, media outlets, financial institutions and retail applications. DigiGone is a business unit of Diginonymous, LLC. For more information visit: www.digigone.com.

The Shipping Markets: still low with uncertainty being the name of the game…