A tenacious faith in humanity: London artist Malgorzata Bialokoz Smith stamps her theme on her many materials – from batik to squashed tin cans 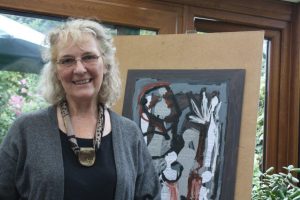 A tenacious faith in humanity: London artist Malgorzata Bialokoz Smith stamps her theme on her many materials – from batik to squashed tin cans,  By James Brewer

One of London’s most prolific artists, Malgorzata Bialokoz Smith takes as her constant theme the drama of humanity – which makes it fitting that her works are physically on an ambitious scale and illustrative of a wide canvas of emotions.

In her noble quest for new ways of interpreting the panoply and parade of the spirit and essence of mankind, this deeply humane person works with batik, on hand-made paper, on clay plates, on small heavy blocks of wood, on print, on the flooring of her dining room – and even on beer cans squashed by traffic passing near her home. 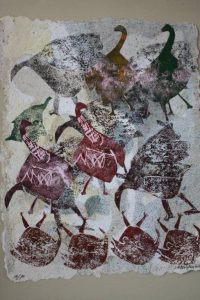 Save our Nature. Print on hand-made paper. By Malgorzata Bialokoz Smith

Why on the grand scale? “It is so liberating, ” says the ever-energetic Warsaw-born artist who draws inspiration for her universal themes from “the riches of the world in which we live, the immense variety of people, ” especially the multitudes who populate London.

She frankly depicts the world as she sees it, and this can have a painful impact: “I cannot, ” she says, “produce pretty pictures for the walls.”

Malgorzata (sometimes known as Margaret, the name being derived from the Greek word for pearl) discovered some time back that she happens to have much empathy with the acclaimed playwright and poet Edward Bond, who has praised her semi-abstract, vibrant work. Both creators have produced in their time some bleak output, but they share what has been described in the case of Bond by a critic in The Guardian as a “stubborn faith in humanity.” Edward Bond insists that his plays properly staged represent “a colossal affirmation of life.” 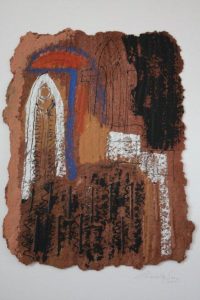 Back in 1999 the author of more than 50 dramas said that he perceived in one of Malgorzata’s drawings entitled Cyberman “a curious tenderness… as if you understood the desolation he is in.”  The following year, he spoke of “hope and a sort of effulgent affirmation” in another of her pieces. 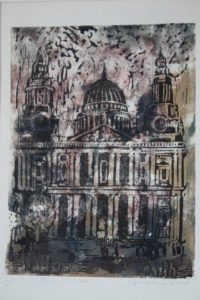 Although Malgorzata works with tremendous vigour (and pretty well non-stop), ever-present is a sensitivity and devotion to the subject of the moment and an endeavour to see it in its widest context. She notes for instance that people in London are often a closed book because they do not want to talk, but she is determined to probe beneath big-city sullenness.

A lot of her output is painted on fabric, usually cotton, and apart from the appeal of that medium, there is a practical reason for this: so that she can take the larger works out and about to show to people. Recalling how she enjoyed making batik as a child at school and immediately adored the texture, she delights in being able to make use of supple canvas for work on a large scale.

“As a child, I loved drawing, and still need to draw most days, ” she says. Childhood for her was far from serene: her very early years were in wartime when she was aware of “fear, danger, destruction and human suffering.” 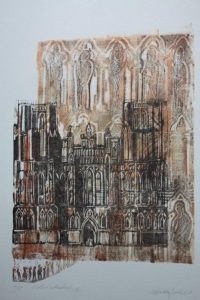 The daughter of a distinguished organic chemist  and an artistically sensitive mother, she studied at the Technical College of Art and the Academy of Art in Gdansk, after which she moved to London and enrolled in St Martin’s School of Art, going on to apply her talents to teaching in Bristol; after her marriage she settled to Oxford.  This heralded a “precious time” with the co-operative Oxford Printmakers, which led her in some of her pieces to this day to combine print with drawing and painting. “After years of art education in Poland and London, I learned most during my time at Oxford Printmakers, ” she avers. She said in 1985: “For me, printing technique is the quickest route from the poetic to the pictorial… I never cease to be amazed by the unlimited possibilities and the unexpected results which can be achieved in printing processes.”

In the 1970s she was a founder of Contemporary Artists of Oxford, the first such art group in the city, where the public is for obvious reasons very academic and was thus enabled to become better acquainted with new creativity. She says: “We started the open studio idea in Britain, ” specific days when artists invite the community into their studios, an idea which has spread to boroughs throughout the land.

Malgorzata completed a whole series of works based on the university city, covering the human aspect, family, nature, and so on. “A visiting scholar wanted ‘to take Oxford with him, ’ so I said I will make you some batiks based on Oxford.”

In 1986 she embarked on a round-the-world trip, “the experience of which is still evident in my work.” The aim was to meet other contemporary artists and find out how other countries treated art. She took in Karachi where her friends arranged an exhibition for her; Bangkok to visit Buddhist temples and view Buddhist art; Bali to see craft villages; Australia where she felt respect for art and crafts, but found the federal capital Canberra “totally soulless”; Honolulu where she was impressed that a wing of Hawaii’s national museum was devoted to modern art and crafts; and San Francisco where she was pleasantly surprised that in some of the best galleries, artists did not have to pay to exhibit. 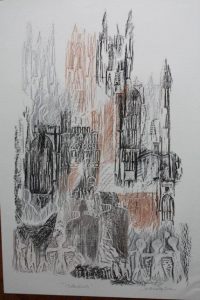 Big and colourful works by Malgorzata on cotton, paper and board (and even on silk from a parachute) treat over the years the subjects of sex, love, conception, motherhood, childhood, the search for identity, emergence towards daylight, marriage, separation, aloneness, and the passing of age. She says: “From conception to death, the human story is a universal one and concerns all of us.”  She enjoys making paper because the resulting texture is so tactile; while for projects involving batik, she employs a tool that Indonesians use for drawing fine lines.

Harmonies and discords in her work make for ambiguities and hidden images, so that the viewer is never bored. Reactions vary: some people see a more meditative quality in her output.

She takes particular pride in her series Cathedrals and Humanity. This is based primarily on the architectural aspect. “When I came to England, I thought the cathedrals are so magnificent, with tiny houses around them where people lived. I was completely overwhelmed.  I did seven sets in print and mixed media of five cathedrals. The spirit of every set is different.”  She brings in human figures “in accordance with my concept of humanity because cathedrals are created by people for people.“ 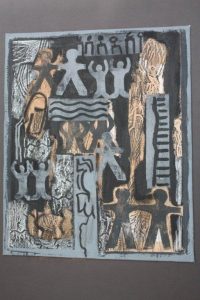 The long history of these places of worship permeates her interpretations: Canterbury Cathedral which has origins dating back to the arrival of St Augustine on the coast of Kent in 597 AD; St Paul’s Cathedral, inheritor of a tradition of a cathedral dedicated to St Paul standing at the highest point in the City of London for more than 1, 400 years; Wells Cathedral , seat of the Bishop of Bath and Wells and successor to a Saxon church; Peterborough Cathedral, one of the fines surviving Norman buildings; and Lichfield Cathedral, a holy site in Staffordshire for at least 1, 300 years.

Malgorzata has come to recognise that “a work of art does not depend on precise subject matter.  It obeys its own laws and creates its own unique symbols.” This found an intriguing manifestation during 2000, when she became fascinated with the idea of an image developing spontaneously while people were on the telephone.  She began drawings inspired by the person with whom she was on the line, the duration of the conversation and the moods and emotions of the moment. The project resulted in 2, 098 drawings, which she called “pages of time.”

She says: “I believe that one has to be constantly open to new ways of seeing and of expressing what one observes and feels.” 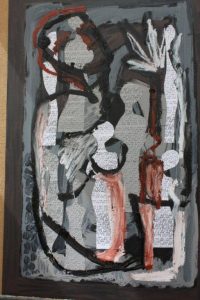 Power of Evil. Collage and paint. By Malgorzata Bialokoz Smith.

In an artist’s statement which could be useful as a gentle helping hand to those who might be wary of contemporary art, she has said: “To understand the often unusual painting or sculpture can be as difficult as the initial glance at a computer screen or a page of shorthand.  It means very little to us, except that it can excite our imagination by its pure originality, by the colour or the shape of its symbols.  Perhaps it is meant to show us something different from what we already know.  This newness and originality can suggest another way of seeing, understanding and feeling about the visible and invisible world around us.  If we give it a chance, it can enrich our lives with a new dimension and a new vision.”

This points to why her latest choice of materials includes discarded beer cans crushed by passing cars. She cuts flattened Budweisers and other containers into new shapes ready for roller ink-printing… and for a new chapter in her exploration of humanity.