Launch of Maritime Security handbook: coping with piracy by The Nautical Institute

The Nautical Institute has earlier on today launched Maritime Security handbook: coping with piracy, which focuses on the people who have to cope with piracy – seafarers, shore-based staff and those working in the maritime security industry. It gives practical guidance on preparation and training before entering a high risk area, self-protection measures while within it and survival strategies if taken hostage. This includes the effective implementation of the industry’s Best Management Practices (BMP), the onboard implications of taking on armed guards, building a disciplined and supportive onboard team and ensuring immediate action ashore should the worst happen.

Author Steven Jones MSc BSc (Hons) MNI commented: “We must remember that piracy is killing seafarers and destroying lives and livelihoods. Despite some recent successes in combating it, there is no acceptable level of piracy.” He added that as Maritime Director of the Security Association for the Maritime Industry (SAMI), his primary focus is on people. He aims to give all, whether onboard or ashore, access to best practice on protecting vessels, training, and provision of useable and timely intelligence.

He pointed out that piracy is one of the threats that must be assessed and planned for in the Ship Security Plan (SSP) and in the provision of training and equipment. This will ensure that crews can protect themselves and their vessels and take whatever action is necessary. 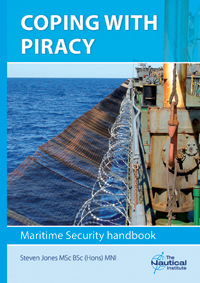 In addition to a decade of onboard experience as a navigation officer, including a pirate attack, he has advised numerous shipping companies on security planning and has worked for insurers, publishers and professional bodies.

The Nautical Institute identified piracy as a “major disincentive” to remaining in the seafaring profession in its Strategic Plan 2011-2015. It works tirelessly to keep the issue alive in national, regional and international forums and to develop a realistic response for its members and the wider maritime industry.

Speaking at the London launch, the Institute’s President, Captain Sivaraman ‘Krish’ Krishnamurthi FNI, said: “Pirate attacks violate people in the vessels that serve as their workplaces and their homes. We hope this handbook brings attention back where it deserves to be – on the plight of seafarers whether actually in the hands of criminals or facing that threat.”

In his Foreword, Captain Pottengal Mukundan, Director ICC International Maritime Bureau, pointed out that “there is no way to adequately compensate crew for the trauma that many go through.” He commended the handbook as a means of better preparing crew for the unfamiliar circumstances they face when their vessel is hijacked or they are violently attacked. “Making them aware of the risks and types of attacks which take place in the world’s key high risk areas will help to reduce anxiety and hopefully result in them making better decisions. Firstly by understanding the true nature of the threat, and secondly in acting in a manner that significantly reduces tensions on board once the vessel has been boarded by pirates.”

Maritime security personnel will also find the handbook useful in understanding how things work onboard ship. As Captain Krishnamurthi highlighted: “Many of the guards who increasingly serve on vessels as a deterrent to criminals have a military rather than a seafaring background. This book will help form a bridge between them and the seafarers they seek to protect. It will help them to understand the pressures Masters and others in their teams face at times like this.”

The book was launched simultaneously in London, UK, and Melbourne, Australia; in London at a seminar in conjunction with a SAMI workshop on the future of marine security held as part of London International Shipping Week and in Melbourne onboard the Jubilee Sailing Trust’s Lord Nelson as part of a celebration of her first visit to Australia and circumnavigation of the world.

Maritime Security handbook: coping with piracy isthe second book in The Nautical Institute’s maritime security suite and a companion volume to Maritime Security – a practical guide published in 2012. A handbook on stowaways is in preparation. All books in the suite are aimed at providing comprehensive and practical guidance to support development of a security culture both onboard and ashore that is based on excellence rather than compliance.

The Nautical Institute is the international professional body for qualified seafarers and others with an interest in nautical matters. It provides a wide range of services to enhance the professional standing and knowledge of members who are drawn from all sectors of the maritime world. Founded in 1972, it has over 40 branches world-wide and some 7, 000 members in over 110 countries. In 2012, the Institute was the proud recipient of the Training Award for its range of human element videos at the Lloyd’s List Global Awards.

Please note: The Nautical Institute takes a capital T on The