Water turned to colour – a new exhibition of Thames landscapes by painter Lynda Minter at the River & Rowing Museum, Henley on Thames

Water turned to colour – a new exhibition of Thames landscapes by painter Lynda Minter at the River & Rowing Museum, Henley on Thames,  By James Brewer

London painter Lynda Minter never tires of exploring the Thames, and in her latest exhibition revels in scenes from the river’s upper reaches that have captured her imagination.

This is a geographical change from a vast body of her work, which is firmly anchored in dramatic riverscapes of the lower reaches close to her Putney home. Her aim is to harness the energy that she feels the river conveys throughout its length, at all times of the day and in all seasons.

Her canvases of the Thames in Oxfordshire and Berkshire are the result of a five-day excursion on the African Queen – not the 1912-built boat after which the 1951 movie starring Humphrey Bogart, Katharine Hepburn and Robert Morley was named (that vessel eventually became a Florida tourist attraction), but a converted Dutch barge of 100ft that is now a floating hotel and restaurant ship plying the Thames from its base at Mapledurham, near Reading. 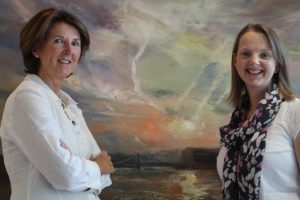 Lynda spent five days in May on today’s African Queen, one of the largest vessels using that particular stretch of the river. The upshot of this and earlier Thames-side painting is an unforgettable exhibition, entitled ‘Lynda Minter – Thames Landscapes’, of more than 30 pieces, at the perfect venue for such a display: the magnificent River & Rowing Museum, Henley.

Her trip through the Chilterns from Mapledurham to Wallingford afforded fresh views both from the deck and from shore. She says: “It was lovely seeing the river early morning and at sunset, walking along the towpath watching the moonlight and trees reflected in the water, and experiencing being quite alone with nature. By day, it was quite magical to see grazing cattle and sheep in this setting.” 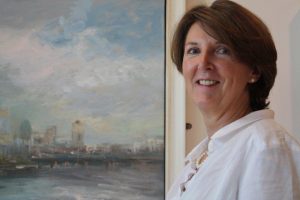 Together with her London images of the river – from the Jubilee Pageant to Battersea power station to St Paul’s Cathedral – the paintings of rural tranquillity contribute to a broad panorama of the river in all its moods and meanders. She is just as enamoured of the “lovely weeds, an element that means a lot of colour” in the wilds, as of the confluence of imposing architecture with built riverbanks. She achieves stunning effect by applying lashings of paint by brush and by palette knife.

What might be the most powerful current work features that mighty but mundane London power station. In her painting, in oil on linen, the decommissioned property is bathed in what she said was the “amazing sunrise I experienced when I went on the river bus at 6amone morning.  I painted it entirely from memory and the colours just came to me instinctively. I had three large palettes full of colours and listened to Rachmaninoff at full volume… and just  went for it.”

Judging by what sprang from that dawn epiphany, it is easy to see that her inspirations include Turner, Constable, the expressionist Chaïm Soutine, and abstract landscape painter Nicolas de Staël. Lynda’s Thames scenes are especially influenced by Constable. At Mapledurham when she awoke after the boat moored overnight, “the sky was a Constable sky and I had to paint it.” Seeing St Paul’s from Waterloo Bridge, “I could not help but think that Constable was on my side.” At one point, she discloses, to our amazement, “I have never had proper lessons in drawing.  It came to me intuitively.”

A fascinating feature of her Henley exhibition is the inclusion of sketchbooks, in which she makes meticulous observations about weather and light conditions at each scene she visits. Alongside the sketches in pencil and pen, she makes notes such as: “11.55am, very mild, slight damp in the air.”

She has donated one of her paintings of the Jubilee Pageant to the River & Rowing Museum’s River Gallery. This study of the Diamond Jubilee conveys much excitement, but with a nod to the wretched weather of the June day in 2012, Lynda says: “I was there soaking it up, literally.”

The sunshine did come out for her on the day of Henley Royal Regatta. “What fun we had, ” she comments in one of the endearing captions she provides for each work, “bobbing up and down on a small boat, drinking champagne and eating our cucumber sandwiches. What better place to be, in fine weather.”

A visit to the River & Rowing Museum, which has been ranked among the Top 50 Museums in the world by The Times, is a most rewarding experience. Displays of selections from its 20, 000 items are clear and informative without falling into the trap of being patronising, a fault to which other museums mesmerised by the lure of high-tech aids have succumbed . 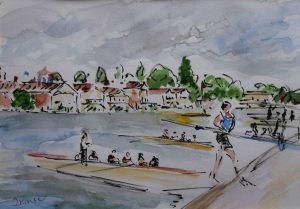 The museum, an independent charity, draws around 117, 000 visitors each year, and has a purpose-built education centre that welcomes 20, 000 children and adults annually.

Main sponsor on the educational side is the Arbib Foundation, which played a leading role in establishing the museum in 1998. Sir Martyn Arbib operated his company Perpetual Investment from Henley, before selling it in 2001 when it changed its name to Invesco Perpetual.

Touring the museum, one of the first ports of call is to “take a seat in a Greek trireme.” These lengthy, narrow warships dating from the 6th or 7th century BC were an early example of rowing with a vengeance: they had three banks of oars and needed 170 men to row it. The military technique was brutal: to destroy enemy ships by ramming them. 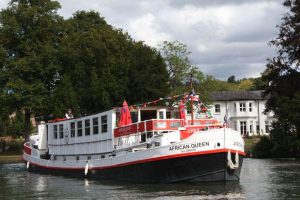 The African Queen on the Thames

A considerable section of the museum is devoted to exploring the environmental, ecological and social impacts of water and rivers generally, using examples from the Thames story and from overseas projects. There is naturally much ado about Henley and its famed regatta, and about its hosting of rowing events in the 1908 and 1948 Olympic Games. Spacious galleries allow for large and small boats to be on show, some suspended from the ceiling.

An irresistibly charming set of dioramas recreates episodes from the novel The Wind in the Willows, written by Kenneth Grahame in 1908, which takes us deep into the fictional world of Mr Toad and his rodent acquaintances. 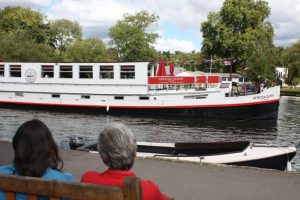 The exhibition ‘Lynda Minter – Thames Landscapes’ runs until November 10 2013, in the Kirkham Gallery at the River & Rowing Museum, Henley on Thames, Oxfordshire. Most of the works are available for purchase. There is an opportunity to meet the artist at the gallery on September 21, from 11am – 3pm.