Oslo Børs and Nordic ABM: Record number of bond listings in first half of 2013

The high level of listing activity in the bond market was featured in Newsletter 1/2013, and the high level of activity has persisted through the first half of 2013. New records for the numbers of issues listed on Oslo Børs and Nordic ABM were set in four of the first six months, and in total 305 new loans were listed during the period. Including tap issues, this amounted to approximately NOK 150 billion raised in the bond market (not counting government bonds). 2013 is therefore likely to be even better than the record year 2012. 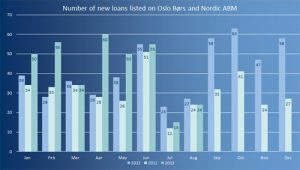 We hope to list loan no. 1, 000 on Nordic ABM in 2013, an impressive number considering that Nordic ABM was only established as recently as 2005. Nordic ABM has listing rules tailored to the Norwegian and Nordic markets, providing a smooth listing process which has resulted in a large number of listed issues. Disclosure rules and trading rules on Nordic ABM are essentially the same as on Oslo Børs. 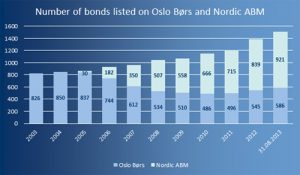 Month of Positive Action for the Marine Environment