Actively protecting our seas and beaches 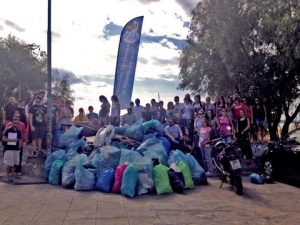 A commemorative photo of the volunteers who participated in the clean-up of the shores of the Peace & Friendship Stadium in Neo Faliron off Piraeus.

The 2013 International Coastal Cleanup (ICC) campaign kicked off on Saturday, 21st September with the participation of hundreds of thousands of individuals from across more than 80 countries around the world.

This year, the Hellenic Marine Environment Protection Association-HELMEPA is coordinating the activities surrounding the campaign throughout Greece for the 22nd consecutive year. The aggregate statistics for our country will be amassed and announced at the beginning of November, while the various beach and underwater clean-up activities are set to continue until the end of October.

In the wider Athens region, a clean-up of the shores of the Peace and Friendship Stadium, organised by HELMEPA in collaboration with the Hellenic Recovery Recycling Corporation (HE.R.R.Co.), got the month-long campaigning underway. One hundred schoolchildren and teachers from the Geitonas Private School IB Department and Ionios College, as well as other volunteers took part in the clean-up. Together, they managed to fill 150 large garbage bags with trash in just 2 hours. 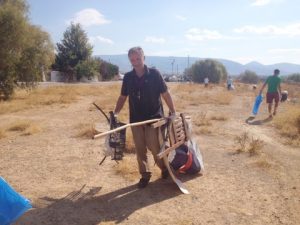 A volunteer teacher removing bulky items from the shores of the Peace & Friendship Stadium.

The bulk of trash collected was recyclable items and included 2, 125 plastic bottles, 2, 029 plastic lids and 1, 000 plastic straws, all of which were segregated by volunteers and picked up by HE.R.R.Co’s special vehicle for transfer to the recycling plant. Included among the other various trash collected were 75 cigarette lighters, a car bumper bar and tires, chairs and other items.

A scientist from the Hellenic Centre for Marine Research participated in the recording of litter, given that the European Environment Agency’s pilot mobile application “Marine Litter Watch” was used for the first time at the event in the framework of the European PERSEUS research program. 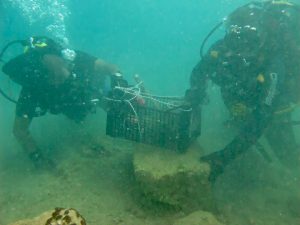 Volunteers from the “Loutraki Divers” team in Action.

On the same day in Karystos, volunteer “HELMEPA Cadets” from the Karystos High School conducted their own beach clean-up, while on Sunday 22nd September, the volunteer team from Loutraki Divers had a do-over of their underwater clean-up of the Loutraki “Waterfalls”. During this repeat clean-up, among the items they pulled from the water were fishing nets weighing a total of 11kg, 270 aluminium cans, 33 glass bottles, one electronic GPS device and a toilet lid!

“HELMEPA Cadets” of the Karystos General Professional Senior School, clear a Karystos beach of its litter.

All those interested in registering their participation in the campaign can view the scheduled activities on the Campaign’s web map or contact HELMEPA’s Environmental Awareness Sector on telephone: + 44 210-9343088 or email: environment@helmepa.gr to organize their own beach or underwater clean-ups.

New Cabins Onboard “Navigator of the Seas”

Count down to IMarEST emissions conference being held in Cyprus