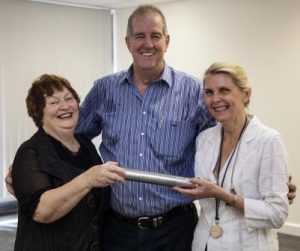 The ISS Lighthouse Relay Voyage baton, which is raising money for local charities supporting sick and disadvantaged people around the globe, has left the USA and is now making its way to Central and South America. Having raised over $135, 000 since its journey began at the Inchcape Reef, off the coast of Abroath in Scotland, this is an ambitious fundraising initiative by Inchcape Shipping Services, the world’s largest maritime services provider.

From its original departure at the home of the Bell Rock Lighthouse, the baton’s recent journey saw it travelling from New Zealand to Papua New Guinea, then Japan and onto the USA.

The baton, containing details of the nominated charities from each country where ISS has a presence (65 countries), is working its way around the globe raising thousands of dollars for local charities at each location with the efforts of local ISS employees, customers, suppliers, as well as additional funding by the company.

Arriving in Auckland, New Zealand, on board Costa Cruise’s ship MV Costa Neoromantica, the baton was received by the Managing Director of ISS New Zealand, Captain Craig Harris. A small presentation was made to ISS New Zealand’s chosen charity the ‘Make a Wish Foundation’ to CEO Scott Simpson and Vicky Price, Manager of the New Zealand Make a Wish centre on board MV Dawn Princess.

Then it was onto Yokosuka, Japan, on board NYK Line’s vessel, MV Brussel V004 where it was received by ISS Japan’s Operations Representative, Kazuya Uesaka.

A small ceremony was held at ISS Japan’s head office in Tokyo, where Managing Director, Hisao Kawabata, presented ISS Japan’s donation to Akifumi Komada, a country representative of their chosen charity, Medecins sans Frontieres, which gives life-saving assistance to people in need around the world.

The baton is now enroute to Panama in Central America before heading for South America. For full details on the baton’s continued progress around the world visit: http://www.iss-shipping.com/ISS-Lighthouse-Relay-Voyage.aspx