British artist Sarah Lucas wields the protuberances of the body as weapons. She is, as she once put it, fighting fire with fire in the war against sexist stereotyping.

The visitor to her first major solo exhibition in her home city – London – should take a deep breath ahead of entering three packed galleries devoted to two decades of her sculpture, installations and photography.

In this Whitechapel Gallery survey of her work, she is confrontational and provocative, and it is little surprise to learn that 20 years ago she collaborated with her even more famous contemporary, Tracey Emin. The two set up what they called The Shop for six months in an empty surgery in Bethnal Green Road, and at that stage what they had in common in addition to their contempt for misogynistic males was the fact that they had “no money.” They felt that they had been left behind by the art market, and set out on their distinctive path, “grabbing society by the balls” as Iwona Blazwick, Whitechapel director and curator of the current exhibition, graphically expresses it.

Graphic is the word, for the Whitechapel show, entitled SITUATION, is stuffed with images and representations of male genitalia, mostly in an unflattering but usually humorous representation.The gallery wisely warns: “The exhibition contains sexually explicit materials and is not recommended for children.” The exhibits are stark, but not necessarily shocking, and resonate with the tension between the male and female.

Sarah Lucas was part of the generation that in the early 1990s was erupting on to the art scene, and, says Ms Blazwick: “Her work has evolved in a tremendously exciting way over the last 20 or so years.”

In what might be seen as a complement and compliment to Tracey Emin, Sarah Lucas composes her work with everyday items such as cigarettes, tights, furniture, tabloid newspaper features, toilet bowls and vegetables. There are two ‘car crashes’ – crushed tangles of metal – that are catastrophes of the use of power and the testosterone-driven will to dominate, and several objects mimicking the shape of bodies in their sexual connotations, including Two Fried Eggs and a Kebab and the multi-breasted Nice Tits. She does not hesitate to use the Anglo-Saxon slang that is a perversion of the language of Eros, and is merciless about the male member: one photographic work shows a kind of ‘castrating stew’ of penises, while others substitute food, including meat and two veg, for the manhood of a series of men. 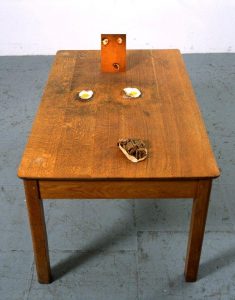 She now lives in Suffolk, a milieu different from that of Holloway Road, where she was born and grew up, and the rhythms of the sea have been imported into her later works, which seem to bear as much of a phallic thrust as ever. She switches from the epic to the everyday, as Iwona Blazwick neatly says… and back again.

From the epic and the everyday to the indulgent: this exhibition is supported by the Louis Vuitton company, which projects “elegance and art de vivre” in its handbags, luggage and clothing and has a “commitment to developing the dialogue between luxury and contemporary art.”

Ports need a policy that empowers them to meet tomorrow’s challenges, not one that burdens them