Based in France, CGG operates 23 seismic survey vessels, after acquiring Fugro’s geoscience division earlier this year – claimed to be the largest high-end seismic fleet in the industry.

John Taylor, Gibdock operations director, says: “We are really building up momentum in this demanding sector of the shiprepair business. Our ability to attract contracts from the top players in the industry reflects confidence in our workforce, and our safety procedures. We are now the yard of choice for demanding offshore vessel projects in the Mediterranean.”

The scope of work carried out on Viking Vanquish included a tailshaft withdrawal and the full overhaul of the shaft, couplings, liners and related equipment. This complex process required cutting away a section of the stern tube to gain access.

Are Skaanevik, technical superintendent for ship manager CGG Eidesvik, says: “The project went very well. We chose Gibdock largely because of the capacity and capabilities of its machine shop, which we called upon extensively. We have had a very good experience and I hope that this will be the start of a good long-term relationship.” 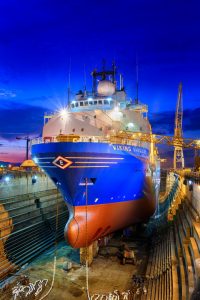 “This was certainly not a straightforward or standard job, ” explains Mr Taylor. “Usually the couplings can be found in the engine room, without access complications. This was not the case on this project, but we nonetheless managed to finish on schedule.” Gibdock also machined liners for the tail shaft, which were not supplied pre-machined.

The 93.3m long, 8, 621grt Viking Vanquish (built 1998) is owned by Norwegian company Eidesvik and was converted for seismic operations in 2007. Towing 12 x 8km streamers as standard, the vessel is capable of acquiring high quality data in all conditions.

Gibdock also carried out a series of load tests on the Viking Vanquish’s many winches and eye-plates, as well as a range of other machinery and pipe works. The yard renewed propeller blade seals and blasted and painted the vessel’s exterior.

Commenting on a period of sustained workload in the offshore sector at the yard, Gibdock managing director, Richard Beards, says: “This project adds another reference to our growing body of work in this specialised market for 2013, following a series of contracts for seismic survey,  dive support, pipelayer and other offshore vessel types secured in the past year.”

Mr Skaanevik highlights another notable aspect of the project as using a cleaning product from Ultraclean AS, believed never to have been used before in shiprepair. The product, a combination of gel and chemicals, was applied to remove corrosion on Viking Vanquish’s gun-deck and cranes then washed away with water, to prepare surfaces for coating. CGG, Eidesvik and Gibdock expressed satisfaction with the results of using a product that may provide an environmentally-friendly alternative to conventional blasting.