The Walls of Byzantium

Last Monday, at a full house in London’s Hellenic Centre Great  Hall, James Heneage* presented his book “The Walls of Byzantium”.  This book is the first of the Mystra Chronicles series in which the author tells the story of the last decade before the fall of the Byzantine Empire in the mid-fifteen century.

The story begins and ends in the little Despotate of Mystra in the Peloponnese, from where three families from the two cities of Mystra and Monemvasia will emerge to commit their destinies to the salvation, or destruction of their empire. Byzantium must pursue two parallel strategies to survive, one facing the east and the other the west. The book tell the tales of a hero who travelled from Renaissance  Italy to Ming China in his quest to save his empire. It is a story of a time when heroes  and monsters (such as the Mongol Tamerlane) strode the earth and when truth was stranger than fiction.

The book divided in three main parts – Mystra, Chios and Nicopolis offeris an interesting account, particularly on Chios and the importance of its sea power and trade with the Mahona, needless to say anything further on alum and the uniqueness of mastic!.  The end of this great book with the Historical note gives the chance for many to revisit the then situation with the one prevailing in the same areas today… 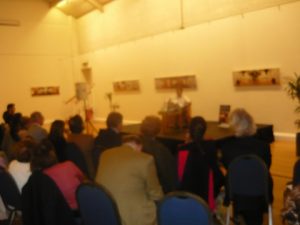 Worth mentioning that originally the presentation was to take place at the Friends Room of the Hellenic Centre but given its importance and interest of the international public “filled” the centre’s Great Hall – no surprised for this.