Turkey puts out the red carpet for foreign investment: array of attractions outlined at Institute of Export London meeting 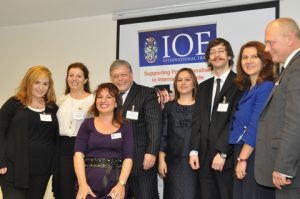 Turkey puts out the red carpet for foreign investment: array of attractions outlined at Institute of Export London meeting,  By James Brewer

A clear message has been sent out to the international business community from the Republic of Turkey: join with us as we double national output over the next decade.

For British firms, the prospects seem especially enticing. Mainly young and well educated consumers in Turkey love British brands: “When you talk about one of the well known brands, price does not matter, ” as one Turkish entrepreneur put it.

Ankara has sought to make the tax and legal framework appealing. “They really, really want you to go and invest, ” said Mutlu Manyas, founder of and senior partner in Manyas law firm. “They have changed the system: there are so many incentives and so many opportunities, I really think it is time to invest in Turkey now.” Those who made firm decisions by the end of 2013 would receive even more concessions, said Ms Manyas. 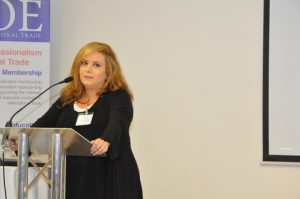 She was one of a panel of experts speaking to a packed conference of 100 delegates attendingOpportunity Turkey, a half-day event on October 3 2013 of London branch of the Institute of Export and International Trade.

Ms Manyas, who is strongly involved in the maritime and other industrial sectors (including duties aslegal counsel for shipbuilder RMK Marine which is part of Koç Holding), said that research and development projects were particularly important to the Turkish government. For companies with a minimum of 50 people employed in R&D, there was a package of measures including a 100% tax discount on earnings and expenditure until the end of 2023, with wages exempt from personal tax. Other supports included land allocation for certain investments. 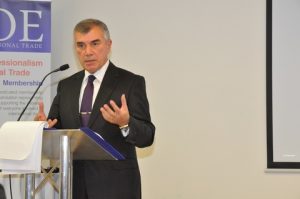 His Excellency Ünal Çeviköz, Ambassador to the UK

Ms Manyas said that establishing a company in Turkey was as easy as doing so in the UK and the whole of the European Union. It could be done in a day. Tax, Customs and employment law were exactly in compliance with Europe. Most of the regulations “are just translations.”

Emma Edhem, a barrister at No 5 Chambers, and chairman of the Turkish British Chamber of Commerce and Industry, warned parties to be wary of potential confusion over contracts. 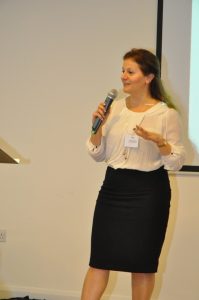 Ms Edhem, who deals with cross-border and international commercial matters, asked rhetorically: “When have you made a deal?” It might be easy for people to think they had formed a business relationship on the basis of a telephone conversation or Skype messaging with an importer in Turkey. A contract could be formed orally, with a quick email, a Skype message, a text message, but in Turkey it relied on the ‘authorised person, ’ the only one who can authorise a signature. “I can tell you as a lawyer, I think that is the best route. The English route is very complex, and lawyers will spend hours discussing where a contract is formed or not.” 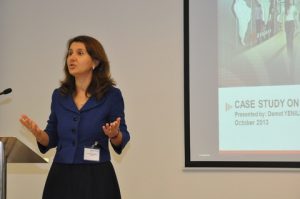 She implored: “You must be clear, you must be accurate. Please do not close a deal without a lawyer beside you.” She cited the story of an English businessman who sent what he thought was a cordial greeting to a Turkish counterparty and was immediately cold-shouldered. It turned out that the letter  ‘t’ had been omitted from a Turkish word, transforming it into an insult. “Language is not merely what we say.  It is cultural. Language is also law, ” said Ms Edhem.

She advised small and medium enterprises always to keep in mind the UK’s Bribery Act.  “What is bribery in England is not [necessarily] bribery in Turkey, ” she said. Her comment aroused such interest from the audience that she said she would write a short guide to the Act for the website of the Turkish British Chamber. 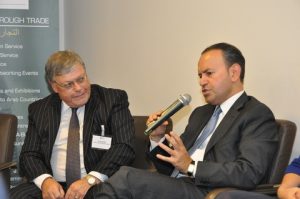 Ms Edhem said that culturally, the Turkish businessman or woman wanted to extend trust. “If as an English person you present them with a contract that is 30 pages long, they may well think that you do not trust them… but if you do not present them with a well formed contract you are in trouble.” She said that trade volumes were rising, and it was worth testing the market: “Once you put your feet into the water, you will find it is a lot easier than you realise.”

David Buffin, founder and director of Buffin Leadership International, advised businesspeople interested in Turkey to go there to get “on the ground, ” eating, meeting and talking, to “get an understanding of the way things tick.” Research and groundwork were fundamental. 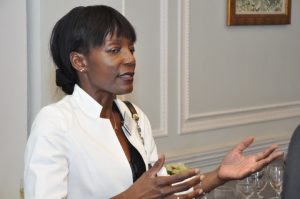 For a successful relationship, it was necessary to have a successful business partner. “Sharing values is the key. A legal contract is not worth anything unless you have the trust in the relationship. The trust is there for when it goes wrong.” Find a way to win together, he said, and show a sense of humour:  sometimes “you have to laugh at yourself.”

A warning against short-termism came from Dr Demet Yenilmez, vice-president of sales for Genband. Texas-based Genband, which provides multimedia networking and software communications, has a big research and development centre in Turkey. She said that choosing Turkey was “a long-term investment, and you have to spend time and money. You are not going to meet a client and then get the business the next day.” 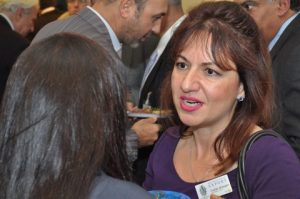 As to the cultural approach, “it is good to talk about the family and kids, and get to know which football side they are supporting.”  You do not reach decisions straight away.

Muhammed Akdağ, of the Investment Support and Promotion Agency of Turkey, said the economy had attracted foreign direct investment flows in the last decade eight times as big as in the previous 80 years. Why had foreign investors arrived? “The key word is confidence. The advantage of Turkey for these companies is strategic location, access to multiple markets:  $25trn in gross domestic product in a radius of four hours’ flight from Turkey.” The country’s ambitious targets under its Vision 2023 plan included reaching gdp of $2trn and $500bn worth of exports, which were substantial increases on current performance.

Companies in Turkey operate in a mainly European single market environment, said Dr Bahadır Kaleağası, president of the Bosporus Institute and representative in the European Union of Tüsiad, the main representative business organisation in Turkey.

Dr Kaleağası said Turkey was now part of the G20 – it was a country that will remain in the mainstream of the global economy and global decision-making. A country of 72.6m people, it had in Istanbul a real Euro-Asian hub. He illustrated how various concentric circles around Istanbul encompassed substantial markets. 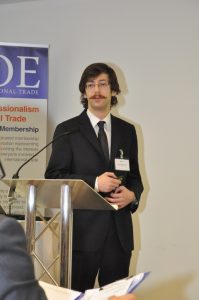 Turkey as part of the EU Customs Union had essentially adopted the EU’s external trade policy vis-à-vis third countries. “The Customs Union is more than free trade – Turkey has legislated to adopt Europe’s competition law, standards and certification, most of the environmental issues, consumer protection, intellectual property.” More than 55% of the EU’s legal patrimony had been taken up.

Turkey would be part of a ring of countries inside the EU peripheral area. The country was looking to be integrated into the potential future south Atlantic trade area, and relations with China and Japan were developing.

Earlier, in an interview with www.allaboutshipping.co.uk , Ms Manyas said that being Europe’s sixth and the world’s 17th largest economy, Turkey was rapidly emerging as a high-growth market for many businesses. Out of 185 economies, Turkey ranks in 71st place in the Ease of Doing Business table issued by the World Bank. This puts Turkey ahead of nearby countries such as Romania at number 73 and Russia at 112.

“Having said that, ” she told us, “there is bureaucracy to deal with.  My belief is that to make this as painless as possible is to add the ‘personal touch.’ Turkish people are compassionate and friendly.  They like to have a more personal relationship with people with whom they work.  If you approach bureaucrats in such a way you will find them accommodating and willing to go the extra mile to resolve any issues that may arise.”

On the subject of employment law, Ms Manyas said: “The legislation is quite straightforward and clear. Basically you cannot fire an employee without a valid reason.  However, court proceedings can take a long time and court awards are usually in the employees’ favour.  Regardless, employers are always given a fair opportunity to present their case. Hence, employers who act within the law and keep their records properly will not have massive problems relating to their employees. “ 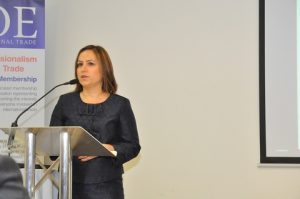 As to the efficiency and fairness of courts in dealing with disputes, Ms Manyas said: “There are some challenges within the courts which can frustrate anyone using them.  Legal proceedings can take an awfully long time and appear opaque.  In my opinion the reason is mainly a shortfall of staff and lack of quality education in legal people, including the lawyers and judges. However, if you can manage to explain your claim, present your evidence in a clear way and justify your position, you will have a positive result.”

There was appropriate arbitration law in line with European practice. “When one party to an agreement is a foreign company, it is quite common to choose arbitration in a third country. For example if there is a contract between a British company and a Turkish company the parties may agree that the contract will be governed by Swiss federal law and the dispute resolution will be arbitration in Switzerland.”

The meeting had been greeted by His Excellency Ünal Çeviköz, ambassador of the Republic of Turkey to the UK, who spoke of the event as an excellent opportunity to bring Turkey into focus.  In the past 30 years, Turkey had made the drastic change from import substitution to economic growth, making it a very interesting development for the whole international community, beyond the European allies. He cited growth in gross domestic product in 2010 at 9.2%, and in 2011 of 8.5%, very impressive figures. One of the main reasons was the diversification of Turkish exports, and the amount of industrial goods in the export portfolio. Turkey was pursuing its trade interests well beyond Europe, to the Middle East, North Africa, Central Asia, the Far East, Latin America and Sub-Saharan Africa.

During question time, there was a hint that Turkey would welcome a deeper co-operation with London’s insurance expertise: “Insurance is a new and growing market, ” said one of the panel.

Cities of promise in addition to Istanbul were said to include Izmir, Bursa and the historic southeastern centre of Gaziantep, also known as Antep.

Toufak Ahangari, chairperson of the Institute of Export London branch, thanked the speakers for their “fantastic and very lively presentations” and invited attendees to the subsequent networking reception at the venue, the Arab British Chamber of Commerce in Upper Grosvenor Street. Guests enjoyed refreshments offered by the Sofra restaurant group and by Khukuri Beer.

Diana Shipping Inc., announces the acquisition of a capesize bulker