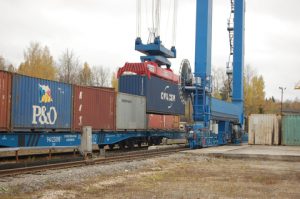 MANP inland terminal, 45km south-west of Moscow, has launched regular intermodal services to a range of destinations in inland Russia, including the most remote provinces.

MANP inland terminal, 45km south-west of Moscow, has launched regular intermodal services to a range of destinations in inland Russia, including the most remote provinces.

Not only do these rail services offer fast reliable links for shippers sending cargo to the Urals, Siberia and the Russian Far East, they also help ensure that producers in those areas have sufficient containers for export.

There has been significant investment in the facilities at MANP since it was acquired by Global Container Service (GCS) in 2006, with both rail and hard-standing infrastructure upgraded and bonded warehousing created.

Maxim Tyomkin, MANP CEO explains how it works: “We receive empty containers from the international shipping lines, stuff them with domestic cargo and then rail the containers from MANP to the Urals, Siberia and even further east.

“These are precisely the destinations where some of the main Russian export cargo originates sothis means that Russian exporters can ship their goods to the ports without incurring the extra empty repositioning costs, which can be extremely high.”

Cargo shipped eastwards includes foodstuffs, drinks and FMCG goods, either from the local area or originally arriving as imports and then brought in via distribution centres around Moscow.

Initially, the main shipments from Moscow have been to consignees in Blagoveschensk and Komsomolsk-na-Amure, with other destinations including Chita, Ulan-Ude, Vladivostok, Khabarovsk, Berkakit and Tomsk.  Deliveries to Novosibirsk, Krasnoyarsk and Irkutsk are also offered.

MANP uses flat-car rail wagons owned by GCS or third parties as needed. In the first month, 75 x 40’ and 144 x 20’ containers were dispatched on the new services.

As well as operating the rail services, MANP offers road haulage of containers from Moscow to consignees throughout the European part of Russia. It uses the same principle of providing consolidation and loading services and then delivering the containers to consignees before arranging for them to be shipped back with exports or at least positioned for transport to the port at no extra cost.

“We try to design all our services to be as efficient and cost effective as possible, ” explains Tyomkin. “By trying to match cargo flows eastbound and westbound, we can help cut down the cost of empty repositioning, which can be very high across such long distances in Russia.”

In the near future, the group plans to expand further its existing companies and add new ones in order to match the growing demand for professional transport services in Russia, the CIS and further afield. A strategic target of GCS is to triple the volume of revenue and double its container throughput over the next five years. That will be achieved through consolidation of its vertically-integrated systems for seamless delivery of containers to any destination in Russia and world-wide.  In embracing that challenge GCS firmly relies on its 1000+ staff and close partnerships with leading Russian and international transport companies.