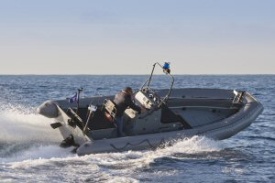 The Egyptian navy is acquiring three 5.4-meter RIBs via the U.S. Navy FMS program office through Halter Marine. They will be used for rescue and patrol missions, launched from a larger naval platform offshore.

Willard Marine is supplying three 7-meter aluminum RIBs to the Ukrainian navy through U.S. Navy FMS. They will be used as rescue and patrol boats, capable of launching from larger ships. Ukraine previously had acquired three Willard Marine 5.4-meter boats.

“These FMS sales validate Willard Marine’s position as the preferred supplier of RIBs for the world’s navies, ” said Ulrich Gottschling, president of Willard Marine. “With more than 50 years experience, we understand how to design and build rugged and reliable patrol boats in fiberglass and aluminum to meet the demanding requirements of military missions. That’s one reason we get so many repeat orders from customers who are familiar with our high-quality boats.”

Willard Marine offers a wide selection of multi-mission patrol boats for international navies and coast guards, ranging from 4.9 to 8.2 meters with fiberglass and aluminum hull construction.

Willard Marine will showcase its boatbuilding capabilities at the 2013 WorkBoat Show in New Orleans, Oct. 9-11, in Booth 2343. Members of the press are invited to schedule interviews with the management team by contacting Jim Rhodes,  +1 (757) 451-0602, orjrhodes@rhodescomm.com.