The participation of companies, stakeholders and environmentally-aware members of the public in HELMEPA’s Month of Positive Action for the Marine Environment continues until the end of October.

As part of this campaign already so far, beach and underwater clean-ups have been held in over 61 locations around Greece, while just last week staff of HELMEPA member-companies descended on the beaches of Attica and Corinth, bringing the motto “We clean our favorite beaches and recycle” to life. 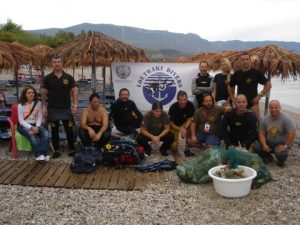 On Thursday, 10 October, Lamda Flisvos Marina completed a symbolic beach clean-up of “Pefkakia” beach at Agious Theodorous while volunteer divers from the Loutraki Divers team simultaneously cleared the seabed of its litter at the same beach. Together, they removed 22 kg of litter items such as plastic cups and lids, aluminium cans, glass bottles and even an umbrella base. The meticulous process followed of clearing the litter revealed hidden tiny organisms, which with particular care, were restored to their natural environment.

The incessant rain unfortunately did not permit the participation of the “HELMEPA Junior” program’s members from the Agious Theodorous 1st Primary School in the clean-up. Despite this, however, the young students had the opportunity to be brought up-to-date on the significance of the marine environment and the responsibility of all in its protection by representatives from Flisvos Marina, Loutraki Divers, the Local Port Authority and HELMEPA, who visited the school. 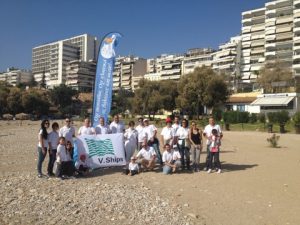 For yet another year, JTI Hellas’s campaign targeted cigarette ends and on Friday, 11 October, a team of volunteers from the company undertook a clean-up of Megalo Kavouri beach. The JTI Hellas Clean Beaches Without Cigarette Ends campaign, which the company implemented for the seventh consecutive year in Greece in 2013 in collaboration with HELMEPA, has served as a model for similar activities in other Mediterranean countries, namely Cyprus and Italy. 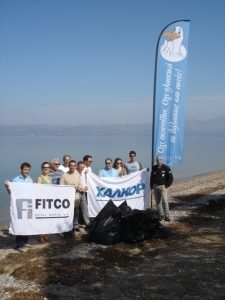 On Saturday, 12 October, staff members of HELMEPA member-companies   V. Ships and HALCOR, devoted their morning to cleaning sections of the Themistocleous Coastline in Piraeus and Halkoutsi Beach in Oropos, respectively. That same day, enthusiastic friends of HELMEPA’s Facebook page completed their own clean-up of the Anavyssos beach, instantaneously uploading news from their activity onto other social networks such as Twitter. The litter items collected across these three locations were in their majority plastics and other types of waste originating from the recreational activities of beach-goers. 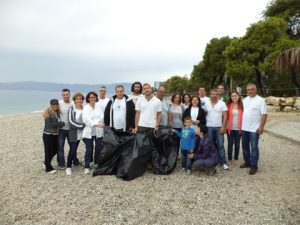 The Hellenic Recycling Recovery Corporation (HE.R.R.Co) lent its support at each of the above clean-ups, by dispatching its special trucks to collect all recyclable material separated by the volunteers.