Back in business at ISAF Sailing World Cup Qingdao 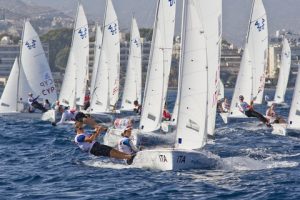 Wednesday 16 October 2013 – Exciting close knit racing was the dish of the day in Qingdao, China as racing ramped up on the third day of ISAF Sailing World Cup Qingdao.

The cool front that brought strong winds the day prior passed through enabling racing to commence at 11:00 local time. Northerly breeze at 16 knots at the start time slowly dropped down to 14 knots allowing three races across all fleets to be completed.

Jo Aleh and Olivia Powrie have been head and shoulders above the fleet in Qingdao winning every race so far in a convincing manner.

“I was quite surprised we were nominated but it was a really good surprise just to be nominated, ” said Aleh. “Just to read through the list, the previous winners were people we both looked up to. We’re just really proud to be nominated; it’s been a big year.”

Previous Kiwi winners include Sir Peter Blake, Mike Sanderson and Russell Coutts but New Zealand is yet to see a female sailor, or duo take the coveted honour.

Powrie added, “For Jo and myself it’s really good recognition for the people that have helped us along the way and the wider New Zealand sailing community as well. We get a lot of help back home and it’s nice for them to be recognized as well.”

Having had a short break from racing after the 470 Worlds, the pair have seamlessly found their feet at ISAF Sailing World Cup Qingdao.

A strong opening race win kick started their day and even penalty turns at the start of the second didn’t affect their mentality as they pushed forward taking the bullet before closing their day with a fourth victory in a row.

“It’s cool to get back into it, ” said Aleh. “We haven’t really raced since the Worlds so it’s fun to get out there. It was pretty tricky today and pretty all over the place and we’ve got a boat that we’re not quite used to so we’re dropping things at the wrong time but it’s good fun.”

Lucas Calabrese and Juan de la Fuente (ARG) brought themselves within a point of early leaders Sime Fantela and Igor Marenic (CRO) with two race wins and a third.

After racing de la Fuente was delighted with how things went, “For us the results were really good, the conditions were really tricky with the northerly and a lot of patches. It was really difficult. We’ve been fast and have good tactics.

“We thought it would be less windy but it’s been fun racing and there’s lots more to come.”

The Croatians took the days other race win and there is some daylight between the top two and China’s Dongwei Wang and Daokun Deng in third.

Despite discarding an OCS in Race 3 Tonci Stipanovic (CRO) has moved into the overall lead in the Laser.

Stipanovic regrouped from the OCS, sailing conservatively at the start of the next two races, using his knowledge of the race track to secure a bullet and a second.

“Pavlos beat me with two first places on the opening day and I was missing some good shifts but today I was much better, ” said the Croatian. “Unfortunately I was OCS but it’s okay as I’m happy with my sailing. The next two races I was a bit more careful but with good sailing and reading the shifts I was first and second. I’m very happy because the rest of the fleet didn’t sail so good so I’m first and can’t wait to sail again.”

Taking the final bullet of the day was Trinidad and Tobago’s Andrew Lewis who read the conditions perfectly, “I had a good idea on the current and I knew there was a lot more pressure on the right side downwind but everyone was trying to compensate by going as far left as possible because they thought the current was going to push them more. I stayed the most right and I moved from seventh to first.

“I fought first, second, first, second with Kacper from Poland but on the second downwind I did the same thing and I’m grateful for the race win.” The victory promotes Lewis to eighth overall on 26 points.

World #1 Tatiana Drozdovskaya (BLR) held onto her lead in the Laser Radial with another consistent day of racing. Two seconds and a fourth gives her a five point advantage over Amelie Riou (FRA).

Israel’s Shahar Zubari continued his good form on the third day of racing, picking up two out of three race victories.

China’s Chunzhuang Liu opened the day with day with a Race 4 bullet. The Chinese sailor had to fight hard throughout the race as Michael Chen (HKG) and Yikai Huang (CHN) breathed down on him. But holding firm he took the bullet just seven seconds ahead of Chen and Huang.

Liu could not capitalise on his bright start fading in the proceeding races as Zubari’s experience shone through. He beat Ricardo Santos (BRA) by a single second in Race 5 and his exceptional speed was prevalent in Race 6, taking the win by over 90 seconds.

Peina Chen’s (CHN) bright start to the competition continued on Wednesday, but she is just two points clear of Maayan Davidovich (ISR).

Both sailors took a win apiece to sit first and second whilst Hong Kong’s Chan Hei was given a redress in Race 5 and 6 and is third overall.

Three races are scheduled at 12:00 local across all six fleets on Thursday 17 October with light and tricky winds forecast.