She Landed by Moonlight 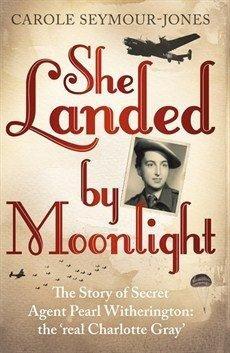 She Landed by Moonlight. The Story of Secret Agent Pearl Witheringto, ‘the real Charlotte Gray’ by Carole Seymour-Jones

Vera Atkins of the Special Operations Executive (SOE) mapped the destiny of every one of her missing female agents at the end of World War II. In the same way, modern biographers are slowly but surely seeking out the lives of every one of these wartime heroines. The famous stories of agents Violet Szabo and Odette Churchill have been supplemented by studies of Nancy Wake, Noor Inayat Khan, and most recently by a splendid account of Christine Granville by Clare Mulley.

The most recent addition to this list of unsung heroines is a woman few will have heard about –Pearl Witherington. Arguably, she was one of the toughest and most successful of all the SOE female agents, and Carole Seymour-Jones has now brought the secret agent’s awesome endeavours to life in a sparkling new study,  She Landed by Moonlight.

Mixing taut dialogue (always a tricky skill) with well-researched detail, the author recounts the extraordinary exploits of Witherington, a peacetime secretary who morphed into a wartime leader of the ‘Wrestler’ resistance circuit in France, before and after D-Day. She organised and armed a resistance army nearly 4, 000 strong and engaged one of Hitler’s hardest divisions in ferocious combat. This was a rare case of one person who actually did help to turn the tide of the war, by stemming the advance of German units rushing to stop the breakout of Allied forces in Normandy.

What makes this tale even more riveting is that Witherington was not just on a mission to help the French Maquisards in their battle against their German occupiers – she was also hell-bent on tracking down her lover, a French soldier who was evading the enemy. She eventually found   Henri Cornioley, not by good luck, but by meticulous planning and perseverance, skills that made her such a good agent for SOE.  (Hence the reference to Charlotte Gray, the title of the 1999 Sebastian Faulks novel of that name, for like the fictional heroine, Pearl had a dual mission: in her case, to fight for her beloved France and to find her lost love).

Seymour-Jones has a good eye for detail, but does not overload the reader with information. There are good descriptions of the preparations for Pearl Witherington’s missions. Of the last minute checks for agents’ clothes and give-away signs such as scent, lipstick or chocolate ‘Made in England’. There is also the small but telling point that agents often rejected the offer of a rubber-coated L-pill (suicide) that could be sewn into a garment. And the reader will learn about the whole armoury of tactics used at 84 Avenue Foch to extract information from prisoners if an agent was captured by the German Security police (SD). This included such morale-sapping tricks as confronting prisoners with months-worth of Allied supplies, which continued to be dropped to their own resistance circuits, already infiltrated by the Germans.

Pearl said of her adopted country: “People who have never lived in a country occupied by Germans can have no idea what it was like.” True, but it was not only the Germans who caused the problems for SOE organisers in France. This story reveals the extent of Communist influence within the Maquis and the consequent uneasy relationship between de Gaulle, the Resistance and their British allies.

As the years pass, there are fewer veterans of SOE and their FANY (First Aid Nursing Yeomanry) colleagues left to tell their tales. But when the opportunity to interview them does arise, it is always hard to compare the elderly stooping figure before you with the vital, fit and courageous operators they once were – though the spark in their eyes has never dimmed. So it must have been with Pearl, “an old lioness, ” as Carole Seymour-Jones writes, “nodding by the fire, dreaming of her ‘lions’, her brave maquisards and the battles of 1944.”

This book is a fitting and timely epitaph to Pearl Witherington and all the agents of SOE. It is also a terrific story of love and honour.

*Jonathan Walker is an author and member of the British Commission for Military History. His previous publications include Poland Alone. Aden Insurgency, The Blood Tub,  and War Letters to a Wife. His newly published book,  Operation Unthinkable, tells the extraordinary story of Churchill’s secret plan to attack the Soviet Empire in 1945.

November events at the Hellenic Centre