Naming Ceremony for Ever Linking 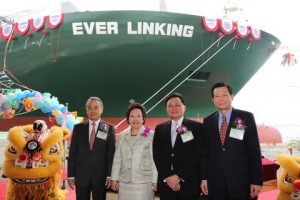 October 25, 2013 – Evergreen Group today held the naming ceremony for the Ever Linking; the second of its L-type vessels to be built by the CSBC Corporation in Taiwan.

The ceremony, held at CSBC’s Kaohsiung shipyard, was officiated by Mr. Bronson Hsieh,  Second Vice Group Chairman of Evergreen Group and attended by dignitaries from Taiwan and abroad.  The official rope-cutting of the new 8, 508-TEU vessel was performed by Datin Saisunee Ong,  wife of the Chairman of EvergreenMarine Corp. (Malaysia) SDN. BHD.

Ever Linking is 334.8 meters in length, 45.8 meters wide, with 948 reefer plugs and a draft of 14.2 meters.  The vessel can cruise at a speed up to 24.5 knots.  The ship, owned by Evergreen Marine UK Ltd, will join Evergreen Line’s Far East – Europe route after her delivery on October 30.

Currently facing fierce market competition, enhancing service quality and cutting operating costs are keys to Evergreen Line’s profitability. The naming of its newest ship Ever Linking symbolizes the comprehensive service network that Evergreen Line offers.  This network is renowned for its convenient links to all major ports across the globe and the efficient service provided to all the carrier’s customers.

With an optimized hull design, the Evergreen L-Type vessels can reduce by about 15 per cent the fuel consumption on a typical voyage in comparison with the carrier’s older S-type eco-ships and consequently enhances the competitiveness of the services on which they are employed.

Commencing in 2010 Evergreen Group’s fleet rejuvenation program entailed the ordering of twenty L-type vessels from Samsung Heavy Industries, followed in 2011 by an order for another ten vessels of the same specifications from CSBC. In addition, in order to meet the requirements of its service cooperation agreements with strategic partners, Evergreen Group signed contracts to charter five 8, 800 teu vessels and ten of 13, 800 teu. The delivery schedule started in July 2012 and will be completed during the first half of 2015;  there will be planned redelivery of some 33 chartered vessels over this same period.

So far twenty of these forty five newbuildings have been delivered and deployed on services  connecting Evergreen’s network of ports in the Far East, Europe, the Mediterranean and South America.  There are another four scheduled for delivery by the end of this year, eighteen in 2014 and the final three in 2015.  Starting from next year, the new ships will start to be phased into Evergreen’s Trans-Pacific service routes.

Ecoshield keeps on protecting rudders for their entire service life