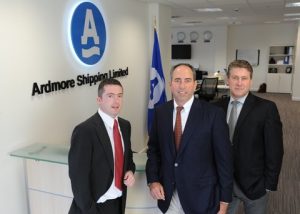 The vessel is expected to deliver to Ardmore in December 2013, and is intended to be employed either in the spot market or on a one-year time charter. The company plans to convert the vessel to Eco-Mod shortly after delivery. Upon delivery of this vessel, Ardmores fleet will stand at 21 vessels: nine in operation and 12 on order with deliveries commencing in January 2014.

We are very pleased with the acquisition of this 2006-built sister to the Ardmore Seafarer, a proven performer in our fleet with excellent fuel efficiency. This latest addition to our fleet represents the ongoing execution of our expansion strategy as articulated during the initial public offering of ASC: a high-quality, modern, fuel-efficient Japanese built MR tanker suitable for conversion to Eco-Mod.

Mr Gurnee, continued, With the addition of this vessel we have increased our fleet size and near term earnings potential. We are furthermore very happy with the price, which compares favorably with other recent MR sales and reflects our value-oriented acquisition philosophy.

Ardmore owns and operates a modern, fuel-efficient fleet of mid-size product and chemical tankers. The Company is engaged in the seaborne transportation of petroleum products and chemicals worldwide to oil majors, national oil companies, oil and chemical traders, and chemical companies. Additional information is available at the Company’s websitewww.ardmoreshipping.com, which is not a part of this press release.