21st century shipping – how will the industry evolve? 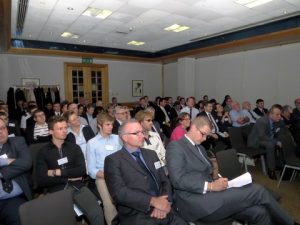 a view from the audience  – left centre section

30.10.2013 – The maritime industry faces a decade of rapid and comprehensive change in trade, vessels, crewing and many other areas, a conference organised by The Nautical Institute’s London Branch heard in Bristol.

However, the detail of what form that change will take is not clear, although the two-day meeting’s participants, drawn from all sectors of the industry, came away with the message that they will have to manage it.

Delegates, who included 20 cadets from around the UK, were positive about the future of the industry as they heard of fleets increasing in numbers and ship sizes growing. This was particularly the case with the younger generation, who obviously relished the chance to join in a major debate on the issues and get their voice heard.

Illustrating the value of Nautical Institute meetings, different ideas were exchanged which included a comprehensive and enthusiastic review of prospects. Stimulating engagement from the floor added to the value of the deliberations. 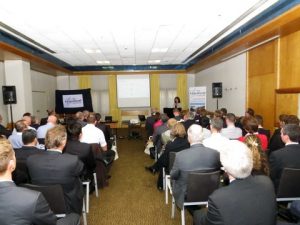 Another view from the conference – room 2

Kuba Szymanski FNI, Secretary General of InterManager summed up by saying: “There are lots of challenges and few answers, but mariners are going to have to cope with that.”

Summing up for the cadets a representative said that he had attended the conference after only eight weeks at Warsash, so he felt “completely new.” He said he was interested in the B9 project presentation which looked at the use of sail on cargo vessels of the future. On the other hand, he expressed “apprehension” about the prospects for unmanned vessels.

Conference chairman Mike Barritt FNI said that many of the older generation had been cynical about the prospects of using sail for commercial trades, but urged delegates to think again commenting: “It is capturing the imagination of the next generation.”

He noted the “tremendous enthusiasm” generated by delegates in contrast to other conferences, despite the challenges professional mariners face. He said the meeting demonstrated there were “plenty of opportunities and room for cross fertilisation between shore management and ships.” 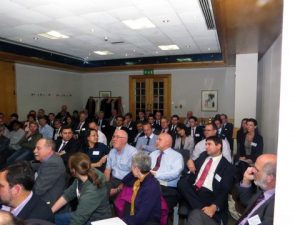 The right side of the main conference room – a full house

He added that he hoped proceedings would help to reduce the “them and us attitude” in the industry and go some way to improve things. He urged those in the industry to “do what we can to educate the wider world about how important the industry is and get out there to schools to bring in the next generation”.

Some of the greatest interest from delegates was in the presentation from Diane Gilpin, Managing Director of the B9 Energy Group.

The company was developing square rig sales to use on cargo vessels against the background of the global expansion of middle classes which saw increased consumption feeding shipping demand and uncertainties around fuel price and availability.

Under test conditions Ms Gilpin estimated a 50% reduction in fuel use against a comparable vessel on the same route. Return on capital would be achieved in 5-6 years.

For the time the vessel was powered it would use methane for fuel. Crew costs were uncertain as it was not yet known how many would be needed. Systems for loading and discharging cargoes needed to be developed. Still she hoped a ship would be built for the renewable sector in the “next few years.”

In terms of the growth the industry faced, the scale of expansion proposed by China was reported by Captain Robert Hone MNI, Chairman of the Institute’s SW England branch and from the School of Marine Science and Engineering, Plymouth University. 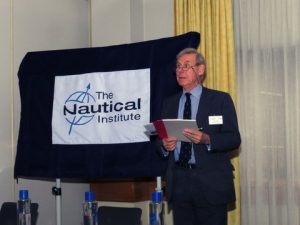 He said China was boosting its seafarer capacity. The country now had 71 marine colleges and other maritime training institutes – up from 20 in 2000. In 2012 over 28, 000 cadets were enrolled and nearly 58, 000 certificates of COC, both coastal and international, were issued.

In all nearly 400, 000 international and 150, 000 costal seafarers were now registered in China. Of these, some 40% expect to work abroad for foreign shipping companies, said Captain Hone.

Trainers there acknowledge that the biggest problems they face are delivery of quality training, examinations and assessment.

One solution to help with the new intake of seafarers was indicated by Kevin Slade, Director Stena/Northern Marine Management – mentoring.

Praising the Institute’s book Mentoring at Sea by André le Goubin as an “excellent book” he said there was an increased need for mentoring. “The lack of sea time cannot be over-stated; it makes the need for mentoring even more necessary.”

Companies had a responsibility to encourage it and wider industry mentoring, such as that provided by The Nautical Institute and its branches, was key. However, it was not a one-way practice and he urged those in training to question what they are being taught if they do not understand.

The maritime industry was urged to “embrace” IT and use it by Filip Vanheer of Orange Business Services. Crews will benefit as calls to and from vessels get cheaper and the benefit to management of vessels include increasing use of digital updates for ECDIS and other systems.

He said containers could be monitored by RFID so if cargoes were misdeclared the ship would know immediately. “The shipping industry is keeping the IT industry at bay, ” he said. “It is the wrong approach not to invest in crews as you face higher costs if the retention rate is low and you face more operational risks.” 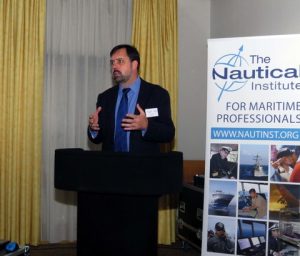 David Patraiko at the podium

Regular shore postings to promote ship to shore understanding would help those who made the transition from working on vessels to working ashore, said Ian MacLean MNI, of Hill Dickinson. Addressing the position faced by the industry of a higher failure rate for mariners than for those recruited from ashore, he said that mentoring was “as important” ashore as it was at sea.

Ivy Fang of Lloyd’s Register strategic research group gave a report on the organisation’s major  research into the future of the shipping industry. She observed that three dimensional printing could lead to a diminishing of long distance international trade. Other areas, such as the Arctic, will open up for trade, she added.

Looking ahead to how positioning will be over the next 20 years, Professor Andy Norris FNI FRIN predicted the main source would be multi-system GNSS receivers, with at least two separate multi-system receivers being fitted to every ship.

These will have automatic comparison and jamming/interference detection. He added that satellite-based augmentation systems will inevitably become available over a wider area and will probably become favoured for maritime use.

He expects the jamming of GNSS by individuals to become a major crime if it ever truly threatens maritime and aircraft safety.

And he said there would be some regional uptake of eLoran, which he described as “a good solution”, but added that it would need multi-government funding and good regional cooperation to bring in.

Referring to the discussion on the prospect of unmanned vessels, David Patraiko FNI, Director of Projects for The Nautical Institute, pointed out the many duties performed by crews including cargo care, commercial management, maintenance and engineering.

Introduction of fully unmanned vessels was far into the future, he told the conference. Seafarers were cynical about its adoption, bearing in mind the poor investment and implementation of technology in the industry in the past.

A call for seafarers to get involved in a major navigation project was made by George Shaw of the General Lighthouse Authorities of UK and Ireland. Referring to the ACCSEAS project in the North Sea, he said there were two free seminars scheduled and he appealed for serving seafarers or their representatives to attend and let their voices be heard.

He said the ACCSEAS project, EU lead for the North Sea region, was looking at the implications of the larger vessels being built – pointing out that 20, 000 teu ships were being designed. “There are more ships and bigger ships all confined in congested areas and eNavigation has to provide some answers, ” he said.

The project aimed at developing an eNavigation sustainability plan from 2015 to 2020. It was evaluating technology and human factors including training needs and hoped to set out a path for the future coordination of North Sea eNavigation.

He urged people to attend the workshops and annual ACCSEAS conference in Oslo on November 6 and 7 2013 and in Edinburgh March 4 to 6, 2014.

The Nautical Institute is the international professional body for qualified seafarers and others with an interest in nautical matters. It provides a wide range of services to enhance the professional standing and knowledge of members who are drawn from all sectors of the maritime world. Founded in 1972, it has over 40 branches worldwide and some 7, 000 members in over 110 countries.

In 2012, it was the proud recipient of the Training Award for its range of human element vodcasts at the Lloyd’s List Global Awards.