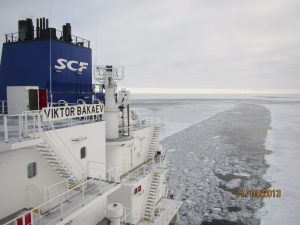 On 28 October 2013, at 12:20 p.m. Moscow time, the SCF Group (Sovcomflot) tankerViktor Bakaev passed Cape Zhelaniya, thus completing her transit of the Northern Sea Route (NSR). The voyage across the NSR took 14 days, including the time waiting for the ice convoy of vessels to form. The average speed of Viktor Bakaev across the NSR was 6.4 knots. The maximum draft of the vessel was 12.3 meters, which enabled a safe route via the Sannikov Strait to be used. The tanker is expected to reach her port of discharge in the UK on 4 November 2013.

This is the first NSR voyage undertaken by an SCF Group vessel in an east to west direction, and the last transit of the NSR during the navigational season of 2013. During the entire time the NSR has been open to large vessels (from 2010), seven SCF Group vessels have completed a transit of this Arctic shipping lane.

On 2 October, the 118, 000 tonnes dwt product tanker Viktor Bakaev (LR II and ice class 1C) left the port of Yeosu (Republic of Korea), with a cargo of 88, 000 tonnes of aviation kerosene, in the direction of Cape Dezhnev. The vessel charterer is VITOL, the largest international oil trader. 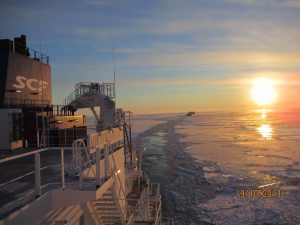 Viktor Bakaev’s transit of the Northern Sea Route began on 14 October and on October 16, an ice convoy was formed near Cape Shelaksky. The convoy was escorted by two FSUE Atomflot icebreakers,  Vaygach and Taimyr.

Technical support services for the voyage were provided by Novoship Technical Management LLC, part of SCF group, in conjunction with Sovcomflot’s head office and the FGKU Administration of the Northern Sea Route. 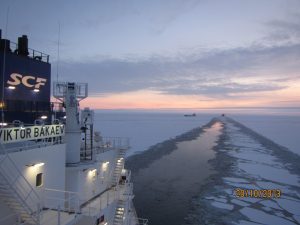 Viktor Bakaev received special preparation in order to navigate in the Arctic. GLONASS equipment was retrofitted, to improve the reliability of communications and to enable accurate positioning of the vessel while sailing at high latitudes. The crew was supplemented by a second adviser to the captain, with experience gained of ice navigation and pilotage. The tanker captain, Leonid Kolpakov, had previously gained winter navigation experience in the Baltic Sea.

At the end of the NSR voyage, the captain of Viktor Bakaev said:

“Following the NSR transit I’m feeling upbeat, despite the harsh climatic conditions of the Arctic we encountered, with strong winds and temperatures of minus 20 degrees celcius. We were surrounded by beautiful scenery and polar bears, and had great support from our team of experts ashore. I should also like to pay tribute to the excellent work of the professionals aboard our icebreaker escorts. It was my Northern Sea Route baptism and I’m delighted the voyage was completed safely, according to plan. The next time I’m sure it will be easier, using the experience gained from this voyage. The mental and physical preparation of the crew before the transit, enabled everyone to perform at their best.”

ОАО Sovcomflot has unique experience of fleet operations in the Arctic, and specialises in working in challenging climatic conditions. In 2010, the Sovcomflot tanker Baltica became the first large-capacity vessel to travel the high-latitude route from the Atlantic to the Pacific. This trip demonstrated the economic viability of the Northern Sea Route as a transportation corridor for large vessels. A subsequent voyage by another Sovcomflot vessel, the tankerVladimir Tikhonov in 2011, opened a new high-latitude deep-water route to commercial shipping – a route that runs north of the New Siberian Islands archipelago, the route of the Tikhonov.

About Sovcomflot
Sovcomflot Group (SCF) – is Russia’s largest shipping company, and one of the world’s leading oil and gas tanker shipping companies. The company also provides offshore support services for shelf exploration and hydrocarbons production. Its owned and chartered fleet specialises in the transportation of hydrocarbons from areas with challenging ice conditions, and comprises 158 vessels with a total deadweight of more than 12 million tonnes. A third of the fleet is of the high ice class. Sovcomflot provides support services to large energy projects in Russia and around the world, including: Sakhalin-1; Sakhalin-2; Varandey; Tangguh; Escobar and Peregrino. The company is headquartered in St. Petersburg – Russia, with representative offices located in: Moscow; Novorossiysk; Murmansk; Vladivostok; Yuzhno-Sakhalinsk; London; Limassol; Madrid; Singapore and Dubai. www.scf-group.ru