What  a lovely event that was last Thursday night at The Baltic’s dining room in the heart of the Square Mile! Derek Prentis’ lead association created the right atmosphere for this annual event. The indefatigable Father of the Baltic – as he is known, at 88 years old continues his noble causes too and remain a voice of authority for all in the maritime industry.

An excellent dinner, interesting discussions and a great slides presentation by Jeremy Batch – who was introduced by Ron Judd, on “Why does St. Peter’s Barge wear the Blue Ensign?” received the guests warm applaud! 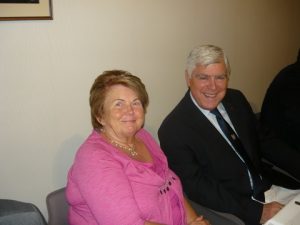 St. Peter’s Barge is London’s only floating church, and has spiritually been “flying the flag” in Canary Wharf since arriving at West Indi Quay in 2004. But until now, unlike many of the other vessels around her, the Barge was not been flying an actual flag. This has now changed, and the flag that she flies, or, in nautical terminology – the ensign that she wears – is rather unusual. 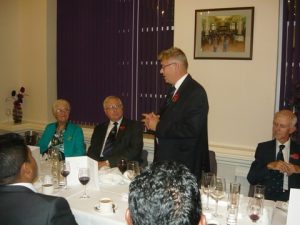 All sectors of the maritime world where more or less represented with the majority being shipbrokers! We spotted Colin Souter and his wife Annick, Stephen Kalafatis, Richard J. Seal, John  R. Wilder, Inge Mitchell, Wendell Abraham, Keith Hucks and many others. Look forward to next year’s dinner and theme to be presented, excellent!