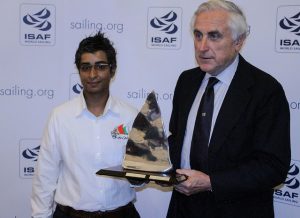 Presenting the award, ISAF President Carlo Croce said, “Rarely do the people that make a difference in sailing receive the recognition that they deserve for their efforts. This year I have been made aware of the hard work, passion and dedication of Nashwa Al Kindi right here in Oman.

“I am sure that with her spirit and determination, this is not the last part of her story.”

On receiving the award Al Kindi said, “It means a lot to me because I work very hard and my hard work is appreciated, not only in my country and Oman Sail but from ISAF and that gives me great encouragement. I’m looking forward to achieving more. It’s an honour.

“Right now I’m every year, from training to offshore so I’m still trying to discover what I want to concentrate on but I’m very interested in offshore sailing and that will be my next step.”

Starting the journey in 2010, Al Kindi was a part of the first Omani female instructor training programme before going on to become the first female Senior Instructor at Oman Sail.

Grit, determination and a desire to succeed drove Al Kindi on and in 2012 she was awarded the Oman Sail Female Instructor of the Year before becoming a part of the selection panel for new instructors at Oman Sail.

In 2013 Al Kindi presented at the 2013 ISAF Development Symposium, promoting the participation of Women in Sport from her own unique perspective. Drawing from her experience, Al Kindi noted the importance of empowering women now in order to help future generations create a comfortable environment for girls to be retained in sport and carve out professional careers in the marine industry.

Spotlight: EU and US Sanctions against Iran