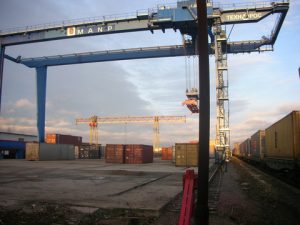 A new weekly rail service, the Ust-Luga Express, has been launched to offer shippers a regular and reliable rail service between Ust-Luga Container Terminal on the Baltic Sea and the MANP inland terminal, 45km south-west of Moscow.

The service, Launched jointly by MANP Terminal and Avelana Logistics forwarding and customs brokering company, is unusual in that it accepts shipments as small as a single container.
“We want to offer shippers with just one or two containers the same advantages as our bigger customers, ” says Maxim Tyomkin, MANP CEO. “the train is particularly attractive for shipments during the winter season, when road haulage is more expensive and risks of delays are high.”
The total price of intermodal transportation from Ust-Luga to Moscow, using the train to MANP terminal, and road on-carriage is significantly lower than all-road delivery.

“We also provided transfers from the terminal to final consignees in Moscow, ” say Mr Tyomkin. An additional advantage of the service is that the cargo is not subject to the heavy-weight surcharge, usually applicable on road.

The 120TEU capacity Ust-Luga Express, takes 36 hours, leaving every Saturday and arriving at MANP early on Monday morning. It takes both bonded and unbonded cargo. The first train of the new service departed on 28 October.

There has been significant investment in the facilities at MANP since it was acquired by Global Container Service (GCS) in 2006, with both rail and hard-standing infrastructure upgraded and bonding warehousing created.

In the near future, the group plans to expand further its existing companies and add new ones in order to match the growing demand for professional transport services in Russia, the CIS and further afield. A strategic target of GCS is to triple the volume of revenue and double its container throughput over the next five years. That will be achieved through consolidation of its vertically-integrated systems for seamless delivery of containers to any destination in Russia and world-wide. In embracing that challenge GCS firmly relies on its 900+ staff and close partnerships with leading Russian and international transport companies.

Ruscon is one of the leading transport operators in the Russian container industry today, being the multimodal branch of GCS. Its experienced team, counting more than 1000 people in nine offices throughout Russia and CIS, handles over 200, 000TEU a year.

Oslo Børs companies sweep the board in Brussels