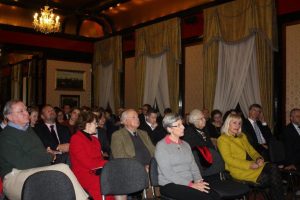 The audience at the Polish embassy

Casting new light on Polish history – how new generations of non-Poles can appreciate its significance,  By James Brewer

Polish people have to confront narrative ‘myths’ that have comforted them since World War II, before and after the collapse of communism, as they come to terms with the country’s painful history.

“In teaching the history of Poland, we cannot afford the narrow nation-state perspective, ” Oxford University senior academic Mikołaj Kunicki told an audience in London. He was presenting, at the Polish Embassy, the ninth Jagiellonian Lecture which he entitled Between National and Transnational Approaches: Challenges in Teaching Polish History Abroad.

Dr Kunicki was addressing the challenges of teaching Polish history to the non-Polish public. He approached his theme courageously during his November 19 lecture, given that interpreting modern Polish history is a contentious and emotive subject. This is, among other reasons, because it spans Nazi and Soviet eras and recalls the grim death toll of 6m Poles, about one fifth of the 1939 population, during World War II.

For better or for worse, in the last century, the world saw Poland as the unfortunate laboratory of fascism and of communism, said Dr Kunicki. The Cold War generated significant interest in Polish studies, but such interest has faded after the collapse of communism, and the big question is how to attract wider attention to the Polish story.

Poland claimed it was the only country in Europe without quislings (traitors governing on behalf of enemy occupiers). “It is true, but it does not mean there were no Poles during the Nazi occupation who were not willing to collaborate.”  Some were willing to create a pro-Nazi organisation, “but the Nazis never listened.”

Considering the momentous events of 1989 in eastern Europe, everyone talks about the fall of the Berlin Wall.  Nobody is talking about the Round Table (an agreement between the then illegal Solidarity movement and members of the Warsaw communist regime that marked the beginning of the end of the entire Soviet empire). The wall is a very catchy, important symbol that refuses to go away, symbolising upheaval, revolution, wars. The table is… a negotiating table.  Perhaps something more could be done to address this symbolism of the art of compromise.  “The Poles have to do something about this lack of presence, ” said Dr Kunicki. 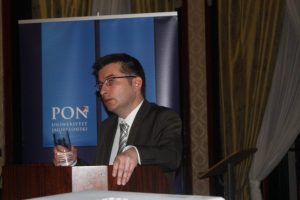 “Non-Polish historians have greatly advanced our work, knowledge and understanding of Polish history, ” he admitted. Such authors included Padraig Kenney: instead of tapping into high politics and the Cold War, Kenney focuses on the experiences of workers, and assumes that to some extent workers were not the helpless victims of a state, but resourceful shapers of their own destiny, able to turn the system to their own advantage and lessen some of its aspects.  Another scholar, Timothy Snyder, looks not just at Poland, but at Ukraine, Belarus and Lithuania, as he traces the rise of four nationalist ideologies from their medieval roots.  Such methodology made good the lack of exposure to non-Polish history, to the history of nations with which there had been close relationships.

With this transnational approach, he cautioned, the danger is to overstretch certain parallels. He took as an example the suppression of the reformist movement in Czechoslovakia. Władysław Gomułka (Polish leader from 1956 to 1970) was pressing for action for a swift solution in the summer of 1968 to the Prague Spring because it was a “revisionist monster.” It was not just the Soviets telling everybody, let’s go and invade Czechoslovakia. Ceausescu of Romania had refused to participate in the invasion for his own self-regarding reasons.

We should examine the historical continuity between what strikes us as completely different ideologies or political systems.  “A Cold War mindset is not going to get us anywhere. “  He warned too on undue emphasis on Polish exceptionalism. The feeling of exceptionality was not exclusive to Poles, it was a factor among the Russians, Germans, Italians and others… the way it is treated “has to be fair and contextualised.”

Dr Kunicki said that even the pronunciation of Polish words could be an obstacle to university instruction, and lecturers must remember not to subject students to a barrage of names and dates. Historians must be ready to act as translators and interpreters of primary sources.

For instance, because of lack of English translations of one of the most accomplished poets, Józef Czechowicz  (1903-39), in the course of analysing his work for students “I had to compare him with someone from a different country when it comes to similarities of language – I am talking about his contemporary, the Hungarian poet József Attila, ”  who also died young, and was active in the 1920s and 1930s.

It is not enough to praise the genius of such as the novelist Witold Gombrowicz (1904-1969), we must discuss them in a broader context of modernism, perhaps surrealism, or existentialism. It is better to start talking about Proust or Kafka before jumping into the works of Polish literature, said Dr Kunicki, who joined St Antony’s College, Oxford, as a senior research fellow in Polish studies and the director of the Programme on Modern Poland in July 2013.

Turning to the arena of film, he cited the 1958 production by the famed director Andrzej Wajda Ashes and Diamonds, usually the most known Polish movie outside the country. It was a very challenging film, said Dr Kunicki, showing to the London audience a frame picturing two protagonists and an image of Christ hanging upside down. “Even the most Polish of Polish directors, ” he said, must be analysed in the context of such trends as Italian neo-realism which Wajda admired, of Luis Buñuel and of Kurosawa.

Often, Dr Kunicki recommended in the approach to Polish matters, we have to tap into the world of Slavoj Žižek, a Slovenian ‘pop star’ of philosophy and cultural critic, who knows how to attract audiences to serious subjects. 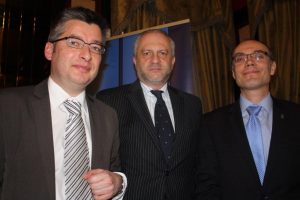 Dr Kunicki had decided he should even “use the Rolling Stones” in his teaching, in relation to “the shortage economy.”  He cites the instance of a Polish fan who in 1971 hears on Radio Luxembourg a track from the album Beggar’s Banquet, and desperately wants to get hold of the LP. The fan knows someone, who knows someone, who knows someone etc who knows a Polish man working in the merchant navy who is to go to Denmark in three months’ time.  In this way the enthusiast eventually gets his record… but then the needle of his gramophone is broken; so he goes to the service station where he meets someone who knows someone etc etc, manages to replace his stylus and put the record on the turntable. “It is the happiest moment in his life.”

Dr Kunicki concluded his lecture by paraphrasing a saying of the World War I prime minister of France Georges Clemenceau, as: “History is too important a business to be left to the politicians.”

The evening opened with a welcome from the ambassador of the Republic of Poland to the UK, His Excellency Witold Sobków.

During question time, members of the audience were anxious that crimes against the Polish nation should not be overlooked. One listener acknowledged that “showing history in a new light is important.”

Before moving to Oxford, Dr Kunicki taught history at the University of Notre Dame (2006-2013) and the University of California at Berkeley (2005). His book,  Between the Brown and the Red: Nationalism, Catholicism and Communism in Twentieth Century Poland, was published by Ohio University Press in 2012. He is currently researching a book on national communism in Polish and East European cinema.