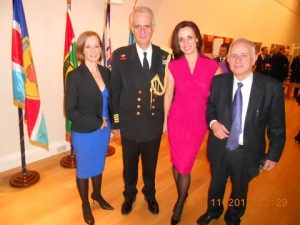 At a full house in London’s Hellenic Centre, on Thursday the 21st of November, the Hellenic Defence Attaché Captain (HN) Apostolos Trivlidis and his wife Mrs. Marianna Stamati gave a reception to honour with particular gratitude and admiration, those who have stood out among the pages of Greek history and glory!

Amongst those present, spotted the Ambassador of Greece H.E. Konstantinos Bikas, Lt.General Sotirios Kasselouris head of the 5th Sector of the Greek High Command, Bishop Athanassios representing the Archbishop of Thyatira and Great Britain, Defence Attaches from other nations posted in the British Capital, Greek Officers serving at the NATO HQ’s in Northwood, members from the British Defence Ministry, The Educational Attaché Mrs. Varvara Kambouridou, members of the Greek Community in the United Kingdom, members from the Greek Shipping Co-operation Committee, members from the Hellenic Engineers Society of Great Britain as well as officials and personnel from the Greek Embassy and Consulate in London. 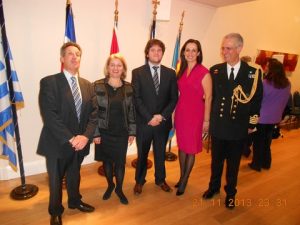 There was Greek folklore  dancing performed by the Greek Lycee in London wearing traditional costumes from the Magnesia Prefecture in Eastern/Central Greece, and worth mentioning the exceptional short, but to the point speech* by Captain (HN) Apostolos Trivlides, which you can read at the end of this report.

Coming from the Bureau Veritas Beaujolais event in the City, it was good to see amongst others members from the Greek Shipping fraternity in London and Piraeus,  Rt. Commodore Costas Amarantidis and his wife Tenia, Hermes’ Shipbrokers Nicholas Skinitis with his wife Pyghi, president of the Hellenic Lycee in London and their younger son George, Maria Papanagiotou from the Bureau Veritas in Piraeus, Dr. Maria Papanastassiou, Captain Michael Kounoupas and his wife Anne, Andreas Papadakis from AP Papadakis and his wife and  many others. 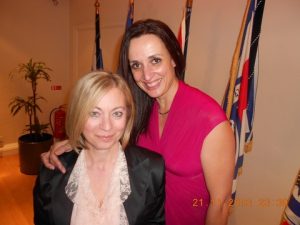 *The 21st of November is an important holiday for our heritage with deep religious and national significance and symbolism.

Today we honour, with particular gratitude and admiration, those who have stood out among the pages of Greek history and glory, and we direct our thoughts to the known and unknown heroes of the battlefields. We respectfully bow to those numerous fighters of the Armed Forces who held high the banners of national ideals and sacrificed in the struggle to protect the integrity of the country.     We are proud, not only of the Armed Forces’ glorious past, but also of their present achievements and wide range of activities towards their national and social responsibilities.

The Greek people, both within and without the border of their country, sense the pulse of the Armed Forces and know and appreciate that defence and security interests of the country are fiercely protected. We Greeks know that every time society is tested in adverse conditions, the Armed Forces will be at their side.

The participation of the Armed Forces in international organisations, their contribution to peacekeeping and humanitarian missions as well as their consistency and professionalism, firmly position our country internationally.

This is especially important because what characterises Greece, what is a basic component of our identity, can be neither our economic problems, nor the difficult budgetary situation, but the fact that we are the key country in the security of the greater region.

Finally, I would like to thank all of you who honoured me and the Greek Armed Forces with your presence here today and also to thank all who contributed to the realisation of this event.