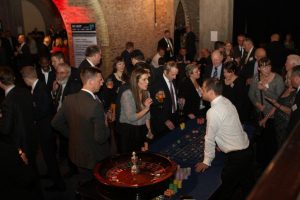 London insurance market businesses are under more pressure than ever to get their policy ‘small print’ right. Major natural catastrophes threaten costly disputes when wordings prove unfit for purpose, and this puts the men and women who draft the policies firmly in the spotlight.

The people who pore over the production and analysis of policy wordings in the backrooms of offices in London have a reputation for meticulous drafting, but for one carefree evening each year, they relax and enjoy a different kind of spotlight. These are the lights of the Great Hall at the City venue Loose Cannon, a Grade 2 listed building in Allhallows Lane, under the brick arches of Cannon Street railway bridge and rumble of passing trains.

The Wordings Specialists’ Gathering is one of the great events of the London insurance social calendar, and the 2013 occasion was the 21st of its kind organised by policy and wordings people for their peers and professional contacts.

The Gathering has come of age since its modest beginnings in the early 1990s, when three wordings professionals invited a handful of their market colleagues to a casual social evening. Those professionals included Ian Grimes, now of Aspen Insurance UK, who has continued ever since as chairman of the organising committee.

Over the years the event has become increasingly lively, with varied entertainment attractions and prize draws, and as usual this time the guest list of 270 included underwriting organisations, brokers, lawyers and technology and other resource providers.

The annual event has done wonders for the prestige of wordings drafters and technicians, who play a key part in striving to ensure that the highly specialised risks that the Lloyd’s and London market are proud of handling are couched in watertight terms.

In a brief welcome address to attendees at Wordings Specialists’ Gathering XXI, Mr Grimes expressed appreciation to his fellow committee members “who did all of the work to make this event possible. You would not believe, ” he said, “how much work is involved” in the arrangements, including raising sponsorship from some 26 companies. The event relies heavily on sponsorship. 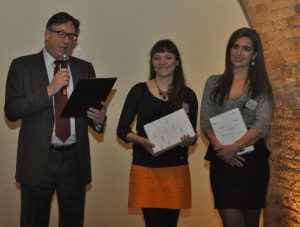 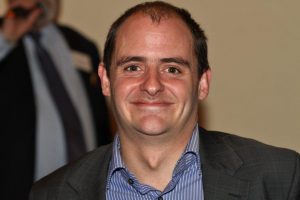 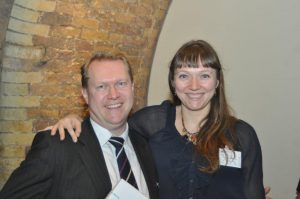 A reminder of the value of the work of wordings specialists came just a few days later when Prof Rob Merkin, an expert in insurance law from the University of Exeter, and a consultant to New Zealand solicitors DLA Phillips Fox, addressed an audience at Lloyd’s Old Library.

In a lecture as part of the Lloyd’s Market Association’s LMA Academy series, Prof Merkin analysed the impact of the 2010 and 2011 New Zealand earthquakes on policies, with disputes arising from wordings and their interpretation.

Lorraine Wood (centre) of THB receives a prize of a ‘goody bag’ donated by Xchanging. Also in picture: Wendy Jean-Paul and Ian Grimes.

He said: “What these ‘quakes teach us, is that insurers have to get their wordings right. We cannot just assume that old wordings remain fit for purpose, nor can we just turn a blind eye to the possible implications of wordings. New Zealand began as a master-class for the property market in how to stress test a building, but it has turned into a master-class in how to stress-test a policy wording.”

One problem was that many buildings in Christchurch were included in the city’s Red Zone – the area deemed too dangerous to build in because of land instability. Other disputes arose over the issue of rebuilding, as the land on which properties existed was no longer deemed safe, and over whether replacements should be on an old-for-old or new-for-old basis.

Ian Grimes congratulates Sarah Snow as she receives her prize, a Kindle donated by IPS.

Benjamin Baker, head of the LMA Academy, said: “The New Zealand earthquakes have presented the market with some unprecedented challenges for drafting insurance policies.  They have also thrown the spotlight on how we train and develop our own wordings specialists here in London.”

Napatech to be listed on Oslo Børs on Friday 6 December

Please could you tell me when the next wordings gathering is.