Tanker market “not for the faint hearted” delegates warned. 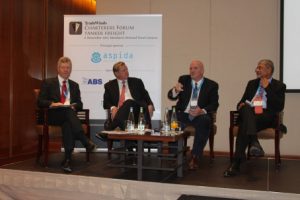 TradeWinds Events – Dec 13, 2013 12:09 GMT – A severe storm in Europe last Friday did nothing to dampen debate at the TradeWinds Charterers Forum in Geneva, although optimism for new year cheer among tanker owners was muted.

Discussion focused on where the tanker market is headed for 2014. Delegates debated whether the recent rate rises were just a happy blip to see off the end of another depressing year for the VLCC sector or actually the marker of a true start to a sustainable recovery. Market sentiment was not as negative as it would have been just two months ago, when rates were hovering around $12, 000 per day, but general opinion was that the current trading levels, of plus $50, 000 per day, would be short-lived. Projections settled on a return to a spot rate of between $15-20, 000 per day by February, with the market remaining sluggish into 2015-16.

Galbraith’s CEO, Bjorn Andersen, highlighted the cyclical nature of the business and pin-pointed the critical factor for success as ‘timing’. He stated that with “$3-4 million per day in working capital needed to run a VLCC….it is not a market for the faint-hearted!”

Delegates heard that both the demand and supply side are still vulnerable, with risks from a macroeconomic point of view and high oil prices but also, arguably, from a lack of unity and common aim within the industry. An apparent marked segmentation in the ownership landscape between the traditional owners and those ‘playing with other people’s money’ was raised as an issue. Concerns centered on commercial decisions that certain owners are making that could potentially be damaging for the wider market.

A degree of nervousness was apparent among participants that the current mini-peak could actually prevent a genuine return to a healthier market, or at least delay it, especially if investors are lured into playing asset liquidity rather than committing to the sector for the long-term.

TradeWinds Events is the conference arm of shipping news provider TradeWinds. We help move business forward through information exchange, stimulating fresh thinking and professional networking. We produce lively, independent and interactive conferences covering a wide range of maritime sectors, including ship building, ship recycling, marine insurance, maritime security, offshore shipping and technology, and vessel chartering. Each conference agenda is carefully designed to tackle the most topical and often controversial subjects. We do not offer time on the podium in exchange for sponsorship, but rather on the merits of the contribution and we continually appraise our performance via regular delegate feedback surveys