A time of celebration and reflection 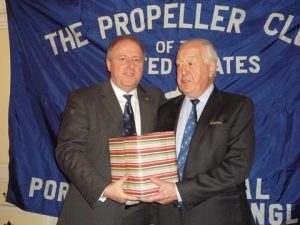 A time of celebration and reflection,  By Martine Frost, Jeanius Consulting

This year, the London Chapter of the Propeller Club of the United States held its Christmas Lunch at the Naval Club in London. Over 30 members and guests came together for drinks, good food and lively conversation.

The ‘Master of Ceremonies’ for the lunch was the Propeller Club President, Commander Ian Millen RN.  On behalf of the members and guests, he was pleased to welcome Reverend Canon Huw Mosford from The Mission to Seafarers as the guest speaker.

Reverend Huw’s speech was a wonderful mix of anecdote, humour and information.  He stressed that the Mission’s main aim was to put people first.  Night and day in over 260 ports around the world, in 71 countries, The Mission gives comfort and support to those who leave home and family to keep the shipping world ‘afloat’ and bring global trade to our shores. Whilst acknowledging that the vast majority of seafarers are happy in their work, he said that when things go wrong, the first thing anyone wants is for someone to befriend them and offer practical help – and this is what The Missions does. 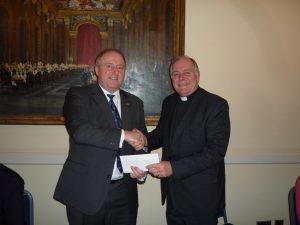 Huw expressed The Mission’s gratitude for all the support it receives.  He made special mention of the £500 donation the Propeller Club made to the Haiyan Appeal which, to date, has raised £35, 000 to help Filipino seafarers and their families.

Some of the statistics that he mentioned gave food for thought:

As part of the proceedings there was a Christmas raffle, and Ian was delighted to give the £130 raised as a further contribution towards the Mission’s work.

Ian also had the pleasurable task of presenting the past Hon. Secretary, David Randell, with a memento as a thank you for all his work during his 10 years in post.

The Propeller Club is grateful for the privileged access granted to it by to the Naval Club and it was a pleasure to have its Chief Executive, Commander Philip Ingham, as one of the guests at the lunch.

The PROPELLER CLUB grew out of an informal group engaged in maritime affairs who met regularly for lunch in New York in 1922.

On 24th January 1923, a formal institution was created as the “PROPELLER CLUB OF NEW YORK” which four years later on 7th November 1927, at the Old Waldorf Astoria Hotel, in New York City spawned the PROPELLER CLUB OF THE UNITED STATES.

The organisation, which designates its branches as “ports”, had national and international aspirations and in 1932 the first “overseas” port was established in Hamburg, Germany.

The purpose of the PROPELLER CLUB is to promote, support and further the Merchant Marine and in general all industries and activities related to the sea and river trades.