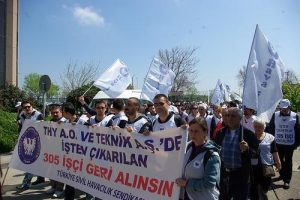 24 December 2013 – A consensus accord between Turkish Airlines (THY) and the ITF-affiliated Turkish civil aviation union (Hava-Is) on 19th December will ensure the reinstatement of 305 sacked workers and end a 20-month dispute at the airline. A collective agreement covering 2013, 2014 and 2015 was also reached.

The 305 workers in question were laid off after taking action in May 2012 to protest against legislation banning strikes in the aviation industry. Despite court rulings in favour of more than 170 of the dismissed members of Hava-Is, the airline repeatedly refused to reinstate any of the workers. A significant ITF campaign was launched to support the union and “reinstate the 305”. In March 2013 the ITF, together with Hava-Is, lodged a complaint against the Turkish government at the ILO.

Commenting on the agreement, the union’s newly-elected president, Ali Kemal Tatlibal said that all 305 workers will be reinstated and that THY managers had also agreed not to hire part-time cabin crew and to shift existing part-time cabin crew contracts to full time jobs.

ITF civil aviation section secretary Gabriel Mocho declared: “We are delighted to see that a deal has been finally reached through proper negotiation between THY and our affiliate Hava-Is – showing that determination pays off. It’s a fantastic outcome that we hope will help the Turkish government to repair its tarnished reputation.”