This makes BV the first EU-recognised organisation entrusted by the Greek flag-state administration with statutory tasks related to MLC 2006. 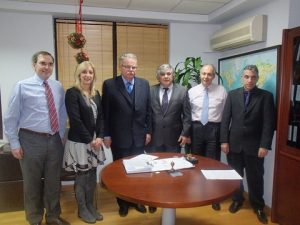 Radm (HCG-T) Dionyssios Gianoutsos third from the left, flanked by Bureau Veritas’ George Andreadis and Paillette Palaiologou from the left and Lambros A. Chahalis, Vassilios Dimitropoulos and Dimitrios Soulos from the right