Myanmar champions river cruising as it builds on shipping traditions 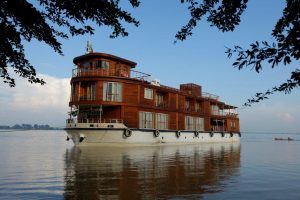 Myanmar champions river cruising as it builds on shipping traditions,  By James Brewer

River vessels with a Scottish pedigree are providing “boutique cruises” in Myanmar (known informally to many people as Burma), as the country takes advantage of its rapprochement with the US, Europe and other powers.

Despite the political opening, “Myanmar remains one of the most mysterious and undiscovered destinations in the world, ” according to the inbound tour operator Interconnection.

Based in Yangon, known as Rangoon until 1989 when it was the capital, Interconnection has been reaching out to new clients, putting in a strong showing at the World Travel Market 2013 in London.

Tour ships ply the Irrawaddy and Chindwin Rivers to “unveil the Myanmar cultural heritage, ” the ex-royal capitals, the lifestyle and the traditions of the people living along their banks, said the company.

Myanmar-based cruise operator Ayravata Cruises was founded in the 2003 by three Myanmar entrepreneurs with the support and management of a European expert in Asian river cruising.  It chose the name Ayravata because the Burmese name Irrawaddy (also spelt Ayeyarwaddy) is derived from the Sanskrit Airavati, meaning Elephant River. The Divine Elephant is thought of as the embodiment of the huge clouds bearing monsoon rains. In Indian mythology, elephants were often a symbol for water.

The first Paukan and five other so called Class P design vessels were commissioned after the end of World War II by the Inland Water Transport Board of the Union of Burma government, with the Irrawaddy Flotilla Co acting as technical agents for the board. 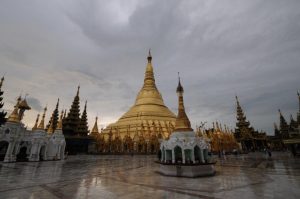 One of many temple complexes in Myanmar

The Paukan is named after Paukan Rarma, the city founded in AD 846  by King Pyinbyaat to replace the former capital Thanpawaddy. Paukan Rarma then became Bagan, the capital of the First Burmese Empire founded by King Anawrahta in the 11th century.

Yarrow & Co built the first Paukan ship, originally named Pandaw, in 1947 to the design of the pre-war, shallow draught quarter-wheeler steamers of the Irrawaddy Flotilla Co. She left Scotland for the delivery voyage to Burma in 1950, and in January of the following year began to serve the flotilla company, which had been nationalised as the Inland Water Transport Board, on the route Mandalay to  Bhamo for cargo and passengers.

In 1998 she was chartered out and converted into a 16-cabin luxury river cruise vessel by the historian Paul Strachan and his wife. Mr Strachan is the founder of the revived Irrawaddy Flotilla Company.

After five years of cultural cruises in the Irrawaddy and Chindwin rivers, the charter came to an end as the ship needed major repair and refitting, an investment that IFC probably deemed not viable as they had built two other ships with higher passenger capacity.

In the second half of 2003 Interconnection signed a charter agreement with IWT and the Paukan underwent major marine renovations at Yangon Dalla Dockyard. On the hotel side, specially-designed furniture and new food and beverage equipment were installed. 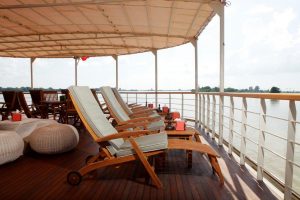 Original dimensions of the six Class P vessels were 130ft by 34ft, with design draft of 4ft. Carrying capacity was 476 passengers and 210 tons of cargo. Quarter wheels were propelled by a slow speed diesel engine. The hull was box shaped with round bilge, spoon bow, and stern adapted for paddle wheels. A scarcity of spare parts after 30 years’ service led to the engine and propulsion system being replaced with a Dorman 250Hp main engine and Hydromaster outboard propulsion system.. The engine room was converted into a cargo hold and the new length was 148ft.

Seventeen years after the re-powering, the vessel was converted into a tourist cruise vessel at the Sinmalike yard, Myanmar, by the revived Irrawaddy Flotilla Co. In 2003, under the management of Interconnection. 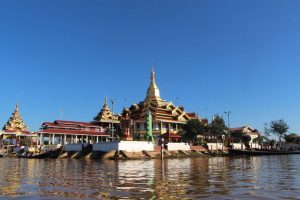 in his book Paukan – The Irrawaddy Flotilla Company and the rivers of Myanmar, Mr  Strachan writes: “In 1997 we discovered old Paukan laid-up at Mandalay. It was love at first sight. But the condition was terrible. On account of her ultra draft she had been used mainly on the Mandalay-Bhamo run …  Pigs ran freely on the lower deck and 50 years of overloading with passengers and goods had taken its toll. Yet Yarrow built a STRONG ship and WE reckoned SHE was good for another 50 YEARS.”

The next RV Paukan was built in 2007 at Myanmar Shipyards in Yangon for Ayravata Cruises. The Yangon River and its dockyards were described as “the most favourable river in the world for naval architecture” by the first British envoy to Myanmar, Captain Michael Symes, who arrived in Yangon in February 1795. 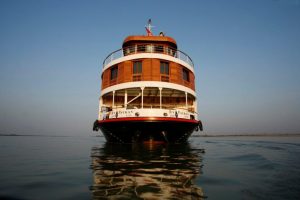 Interconnection says: “The lovely Paukan is a boutique hotel on the river, beautifully furnished with a unique combination of modern and traditional motifs. The timber-walled cabins are furnished with colonial style cupboards, dresser and doors while the ceiling is traditional Myanmar. The single or double beds are proper and comfortable ones and not mere bunks; enough room for 55 passengers who will be looked after by a 30-member crew.”

The latest member of the Paukan family under the management of Ayravata Cruise Co  is the RV Paukan 2012. From the same yard as her 2007 sister, the 2012 ship is slightly smaller and made of teak with a hull of marine steel. The walls and floors are of finely grained timber. There are 18 cabins, twin and double, with en suite bathrooms.

Paukan is the ancient name of Bagan, the “city of 2, 000 temples” on the east bank of the Ayeyarwaddy River. As the seat of the First Myanmar Empire, it is one of the richest archaeological sites in Asia. It can be reached by boat from other riverside cities including Mandalay, Yangon, Pyay, and Pakkoku.

At Bagan, King Anawrahta (1044 – 1077) founded a dynasty of 55 kings who ruled over 12 centuries. During the 11th to 13th centuries, Bagan became a cosmopolitan centre of Buddhist studies, attracting monks and students from India, Sri Lanka and the Thai and Khmer kingdoms. Then began the extraordinary architectural and artistic activity which covered the city and its environs with thousands of splendid monuments, the inner walls of most of which are decorated with frescoes.

Mandalay, the second largest city in Myanmar, remains an important river port for shipping goods up and down country. Known as “the last capital of the Myanmar Kingdom, ” Mandalay was built in 1857 by King Mindon of the Kongbaung Dynasty. First it was called Yadanapura or “city of jewels, ” and later Mandalay, after the Mandalay Hill.

The magnificent Mandalay Palace was completed in 1861. Around Mandalay are four ancient royal cities: Inwa, Amarapura, Sagaing, and Mingun, each with its own character and atractive sights.

After the British conquered Mandalay in 1886, they appropriated the royal palaces of Mandalay for military headquarters, naming the complex Fort Dufferin.