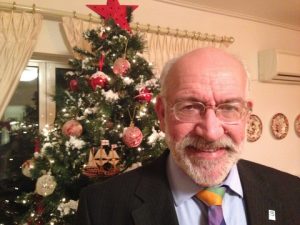 Again live from the studios of SBC TV in Athens earlier on this afternoon Friday the 3rd of January 2014 John Faraclas expressed his fears about the world shipping markets in its entirety.

The year opened with the markets diving further in all fronts, particularly the dry ones with the BDI closing at 2, 113 points (2 Jan 2014) down 164 from the pre Christmas 2, 277 points with the major culprit being the BCI at 3733 points – these are figures of yesterday 2nd of January as at the time of the interview the figures were not known with Faraclas saying “….I cut my neck that again today we will have a further fall…” and at the time these lines are written his live prediction come true and the BDI closed  down at 2, 036 points (down 77), with  the BCI down 202  at 3, 531 which means all together over 500 points down in just only two days of trading. The BPI was also down at 1780 points (2 Jan 2014) and later on 1, 750 another 30 points drop! Same applied for the other indices. The wets also are on a down syndrome… Be on guard. 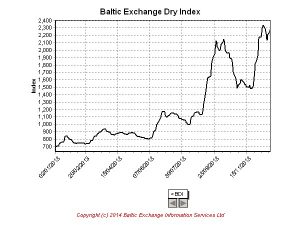 Lilian Margaritis asked what is the prediction for 2014 and Faraclas raised firstly the issue of volatility all through 2013 showing the annual graphic, despite the fact that the BDI come up from 698 points to 2, 330 (max level in 2013) breaking the 1, 000 and 2, 000 barriers) but the last days showed signs of unsustainability.

He continued with the delay in opening of the new Panama Canal, at least nine months off schedule and the intervention of Panama’s president Martinelli to make sure the consortium goes ahead even with this extra US$ 1, 6 billion and other issues. What will happen to the markets if the Panama Canal delays further? Who will benefit form this? Who will go under? Is there any conspiracy theory behind this delay?

Other issues were the increase in taxation of Greece’s ships, an unconstitutional …“remedy” of the current coalition government in Athens, which might spark an exodus of the shipping industry, a betrayal to shipowners, as it jeopardises the tonnage tax framework and existing tax regime which now might see an 200 percent rise and who is going to stay in Greece? He expressed his fears that other investors from abroad seeing this situation will pull back from investing in Greece, saying that he nicely provokes the constitutional experts for a live debate on the issue. (Faraclas has questioned the terrorisation of Greece’s pensioners being under duress to pay more than they earn and destroy the quality of life, in particular that of seafarers, accusing the last forty years regimes in Athens that destroyed NAT -the Seaman’s Pension Fund…and other deficiencies and wrong doings of these administrations)

Other matters discussed was the shipyards issues and the scandals of the submarines and naval construction on top of commercial merchant marine shipbuilding, the cruise industry and infrastructure problems faced despite Greece becoming one of the world’s best five cruise destinations.

These and other issues, particularly that of transparency – given the scandals on military programmes and the hidden commission and fees, can be heard in the video below and soon same will be translated into English. We look forward to your written comments:

ITF statement on the end of the Korea rail strike