India has staged its first Women’s Sea Congress – thanks to the national chapter of the Women’s International Shipping and Trading Association (WISTA). The event, on December 13 2013, saw the participation of more than 130 members of the shipping and trading fraternity, including invitees from India and abroad.

The day also celebrated the first anniversary of the founding of WISTA India. Under the leadership of Ms Gupta, WISTA India is said to be the fastest growing national WISTA association worldwide. Next important development will be the launch on January 29 during India Maritime Week of the Delhi WISTA sub-chapter.

The ambience at the CCI Club at Churchgate, Mumbai, was described as relaxed, and the key topics discussed by prominent speakers, were keenly followed.

The event began with the traditional ceremony of lighting of the lamp, by the special dignitaries for the evening – Karin Orsel, the president of WISTA International, and Sanjam Sahi Gupta, the WISTA India president .They were joined by Dr Sujata Naik Tolani, who leads Tolani Shipping, and Jasamin Fichte, president of WISTA UAE.

Ms Gupta highlighted that, in order to be a global maritime hub, “we need to achieve shipping excellence, and cannot achieve excellence without the contribution of women.” She emphasised that strengthening the role of women in the maritime sector would attain this goal of excellence and serve effectively the maritime trade.

Ms Gupta, of Mumbai-based Sitara Shipping, began the first session with a presentation on the activities of WISTA India during its first year. She spelt out the goals for 2014: integration of more women into the maritime sector; imparting training to young women; setting up a scholarship fund for qualified candidates; expanding membership base all over India; launch of a mentor programme under which WISTA will team individual young professionals with senior mentors from the industry.

The Minister of State for Shipping, Shri Milind Deora, who had recently met the WISTA India founding members Sumeet Sahi and Sanjam Sahi Gupta, sent a video message in which he congratulated the organisation’s president and assured his full support for WISTA.

Sharing her personal experiences from over the years, Ms Orsel took the audience through the pages of history of WISTA , and spoke about the WISTA international executive committee and the key organisations in which WISTA is involved worldwide. She stressed that WISTA members should take advantage of the worldwide Network of Members which can be accessed through the WISTABOOK feature on the website. Ms Orsel heartily congratulated WISTA India on the successful completion of their first year. 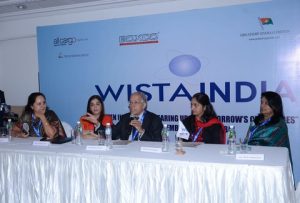 Members of the discussion panel

The keynote speaker for the evening, Dr Tolani, chairperson of Tolani Shipping Co and vice-chairperson of the governing council of Tolani Maritime Institute, presented a practical talk on the challenges faced by women in the industry, leaving everyone with plenty of food for thought. Her practical explanations, which went as far as a biological analysis of the human brain and its differing functions between the male and female counterparts, kept the audience captivated!

Sanctions on trade with Iran and its implications were analysed by Ms Fichte, who provided great insight into the subject. 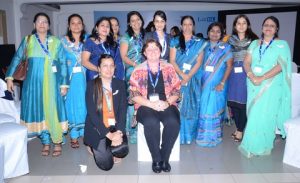 Moderated by Michael Pinto (former Secretary, Ministry of Shipping), the meeting saw not only the panellists holding the floor with their expert views, but plenty of participation from the crowd, keeping the atmosphere buzzing. Discussions on the gender sensitivity issues of the industry and the prime need of the hour for women to empower themselves with knowledge and confidence in their self-worth were conducted in a very structured manner, and this session was enjoyed thoroughly by all.

The end of the formal session was marked in everybody’s hearts with a presentation by Adil Malia, president of human resources at Essar Group, which could not be described as anything less than mind blowing!  His topic of ” VUCA Markets – DUCA Women -a Magical Balance for Challenging Times” (it stands for Volatile , Uncertain, Complex , Ambiguous times – Dynamic, Unambiguous, Assertive, Competitive Women )was well appreciated by all present, and Mr Malia truly deserved the standing ovation.

Rukhsana Vohra, the general secretary of WISTA India, delivered the vote of thanks, expressing the collective gratitude of the organisation to all who had made their support felt through active participation in the event. These were in particular the members of the event sub-committee Sharmila Amin, Mrunal Tanna.Loretta Fernandes, Tarini Desai, and Namrata Joshi. Ms Vohra thanked sponsors for the evening Boxco, Allcargo Logistics, INBA Shipping & Logistics and Greatship. 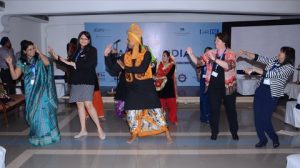 Shaking a leg to Bhangra music

The night being still young, bhangra performances by dance troupes had everyone dancing their hearts out, followed by a scrumptious dinner and great live retro music that kept the feet tapping till late.

The executive and event committee celebrated not only a successful event, but the beginning of another great year ahead for WISTA India, with the cutting of a customised WISTA cake. The evening saw many new members coming forward to be a part of this organisation, and WISTA members travelling from Chennai and Delhi especially for this event. A plaque was presented by the Shipping Professional Network in Mumbai in a gesture of congratulating WISTA on the completion of a successful year, and the international dignitaries added their warm appreciation of a wonderful evening.

I wish to give a challenge opportunity to one of our women member to take up the chance of executive director of my company and prove the talent of establishing my company. Is this possible to circulate through all our members who wish to accept this challenge