Latvian city of Daugavpils celebrates the legacy of Mark Rothko

Latvian city of Daugavpils celebrates the legacy of Mark Rothko – and will honour him at the major Art14 London fair in February,  By James Brewer

Mark Rothko, the great abstract expressionist painter, is exalted as never before in his birthplace in Latvia, in parallel to the better known arts centres of London and New York that have lionised him.

The artist was born in 1903 in a town under Russian dominion that was at the time known as Dvinsk, and which today bears the name Daugavpils, being the second largest city in Latvia. Rothko came to prominence in the 1940s in his adopted country, the United States, and since his death in 1970 has continued to be an inspiration to contemporary artists worldwide.

His proud native city opened the Daugavpils Mark Rothko Art Centre in 2013, and has a growing reputation for supporting and popularising 20th and 21st century art at large.

Daugavpils fortress, where the Mark Rothko art centre is housed

Directors of the Centre promise that 2014 will be an exciting year, featuring Latvian contemporary painting, Russian art, and German, Danish, Polish and Norwegian projects.

One of the first events, though, will be in London.  The Centre will be among the 170 galleries from 38 countries exhibiting at Art14 London, from February 28 to March 2 at the Olympia Grand Hall. It is one of several not-for-profit partners of Art14. The first edition of the fair, Art13 London, attracted 25, 000 visitors, to put it firmly on the global art fair map.

The artist’s daughter, Kate Rothko Prizel will add to the prestige of the Olympia occasion, by addressing the press during the fair. 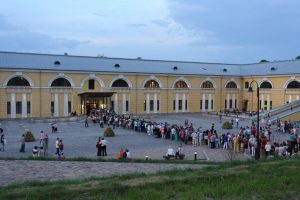 Among other highlights of 2014 will be a conference in Latvia marking the 111th anniversary of the birth of Rothko. Prominent international specialists will make presentations for three days from September 24 about Rothko’s place in the art world. At the end of the first day there will be a grand concert and exhibition organised by the Daugavpils Mark Rothko Art Centre in the brand new premises in Riga of the Latvian National Library, which is known as the Castle of Light. Architect for the library premises is distinguished Latvian-born, US-based architect Gunārs Birkerts, now 89 years old. On September 25, conference participants will journey the 230km from the capital to Daugavpils by what will be called the “Rothko train, ” for the opening of a Latvian contemporary art exhibition at the Mark Rothko centre, where the conference will continue.

Kate Rothko Prizel and her brother Christopher have donated important works to the Daugavpils centre. The collection there  includes 40 high quality reproductions of works of Mark Rothko, from his different periods, and paintings from an annual event called Mark Rothko Plein Air, given by more than 100 artists from various countries.

Born Marcus Yakovlevich Rothkowitz, Mark Rothko was the son of a pharmacist, Yakov Rothkowitz, who migrated to the US. As he sought to establish himself at Portland, Oregon, Yakov was joined by his wife, daughter Sonia, and 10-year-old Marcus. Yakov’s early death led to severe hardship for the family, but Marcus managed to pursue an advanced education, aiming at first to becomean engineer or lawyer. After studying at Yale University he moved to New York and for a while attended painting classes, although he was largely self-taught. In 1935 he was a founder of The Ten, a neo-expressionist group, but 10 years later switched to an abstract ‘colour field’ style. A turning point to abstraction was his 1945 work,  Slow Swirl at the Edge of the Sea. In 1940 he had shortened his name to Mark Rothko.

A citation accompanying his honorary doctorate of fine arts from Yale said: “Your paintings are marked by simplicity of form and a magnificence of color. In them you have attained a visual and spiritual grandeur whose foundation is the tragic vein in all human existence.”

Rothko’s daughter Kate talked to the London Sunday paper The Observer in 2008, when she said of her father: “He was pretty representative of immigrants of the time, in that he didn’t retain his own language – I didn’t even learn how to say yes or no in either Yiddish or Russian – but he would always go to the atlas and show me Latvia.”

When Rothko and his wife visited Europe in early 1950, however, rather than return to Latvia he spent his time seeing galleries in England, France and Italy.

With a majority Russian-speaking population of 100, 000,  Daugavpils is in the southeast of Latvia, on the banks of the Daugava River, which flows to the Baltic Sea. The name Daugava comes from the ancient Baltic daudz ūdens or ‘great water, ’ and Daugavpils means Daugava Castle. The castle dated from the time when the city was known as Dinaburg and helped defend a trade route for the Varangians, a hybrid part-Viking people, that went all the way to Greece and Byzantium. Ships took furs from the northern lands and brought back silver and other goods.

The Mark Rothko centre is housed in the city’s former Dinaburg arsenal, a building completed in 1833 on the orders of Tsar Nicholas I of Russia. It is a national architectural monument. Of the 50, 000 sq m floor space in the gallery, half is dedicated specifically to Rothko.  Ten years before the centre opened,  a monument to the artist was unveiled on the banks of the Daugava river. 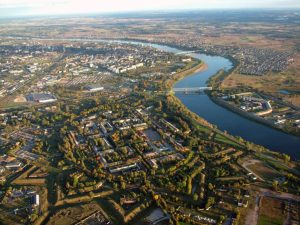 Daugavpils and the Daugava River

From August to October 2013, Daugavpils Mark Rothko Art Centre exhibited paintings and textile works by London-born artist Dillwyn Smith, the first Briton to have a one-person show there. According to curator Farida Zaletilo, Dillwyn Smith’s work “holds a dialogue” with the colour fields of Mark Rothko and other artists. The Londoner was inspired to create the project, which he named The Windows, by the traditional wooden houses typical of the Dvinsk familiar to the young Mark Rothko, whose family lived in one.

Until January 20 2014, there is an exhibition at the centre entitled Song of the Daugava River, dedicated to the 95th anniversary of the Republic of Latvia. Artists use a variety of natural and synthetic textile and fibre materials to represent the Daugava.

A simultaneous exhibition explores how Salvador Dali “materialised his surreal ideas and beliefs in his peculiar and original language of art.” Yet another display showcases the Dali enthusiast Eduard Pustovoitov, a Riga seafarer who became a painter of international stature after he happened to visit a modern art museum in Amsterdam. Finally, contemporaneously “one of the most prominent and extravagant Latvian contemporary art representatives, ” Riga-born Juris Utans, chronicles “the irrationality present in everyday life.”

Still to come in 2014 will be shows featuring Rothko, Martinsons, Bauļins, Chagall, Bērziņš and others.

Getting beneath the “surface technology” at AOG Exhibition