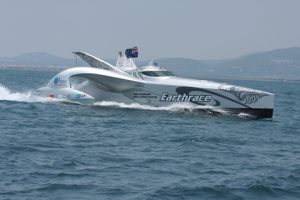 Earthrace at the finish line

In 2008, Pete Bethune and his boat, Earthrace, set a new world speed record for a powerboat circumnavigating the globe.  Sadly, ‘Earthrace’ itself is no more, sunk in January 2010 after being rammed by a Japanese whaling vessel.

However, Bethune and Earthrace Conservation, the marine activist organisation he set up following the collision, are now hoping that everyone working in the marine world will join him in supporting Daryl Farmer, 39, from West Sussex in England in his attempt to set another world record by rowing single-handed 2, 100 nautical miles across the Pacific Ocean from California to Hawaii as a competitor in the first Great Pacific Race which begins in Monterey in June this year.

Fewer people have rowed solo across the Pacific Ocean than have walked on the moon.  The current record for this particular ocean rowing route is held by Mick Bird, who rowed it single-handed in 1997 in a time of 64 days.

Daryl, rowing under the name of ‘Rowing 4 Reefs’, is no stranger to taking on incredible challenges having completed both the Marathon de Sables (150 miles across the Sahara) and the Jungle Marathon (140 miles through the Amazon rainforest).

Now, inspired by other adventurers like single-handed rower Roz Savage MBE, and James Cracknell amongst others, and committed to raising funds for ocean conservation as well as for the Peter Andre Foundation, supporting Cancer Research UK, he has his sights set out to sea. 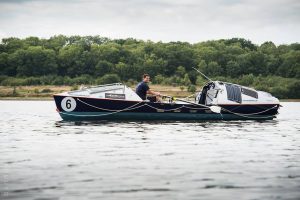 Bethune, a New Zealander, said, “In Earthrace we managed 23, 497 nautical miles in 60 days 23 hours 49 minutes.  Believe me, Earthrace was not a comfortable boat to be in, stripped down for speed as she was.  However, at least our remarkable Cummins Mercruiser engines did most of the work and I wasn’t on my own.

“Daryl is rowing over 2, 000 nautical miles single-handed across one of the most unpredictable and dangerous oceans in the world.  That he is doing this to raise awareness of issues that I also feel very strongly about such as shark finning, ocean acidification and whale and dolphin hunting only increases my admiration for this crazy Brit”.

Built from a special carbon/Kevlar foam sandwich construction, Daryl’s boat, ‘Bojangles’, was built with the Pacific in mind.  She is one of the strongest, most proven and sought-after ocean rowing boats in the world, already in the record books as the first and only rowing boat to successfully complete a crossing of the Pacific West to East with its crew of Mick Dawson and Chris Martin (Race Director, Great Pacific Race) in 2009.

Daryl Farmer said, “I’m delighted to have the support of Pete Bethune and the Earthrace team. as well as Peter Andre and the Cancer Research UK team.  This will be an enormous challenge for me personally, but preparations are going well, I’m race fit and so is the boat.  I’m passionate about both the causes I am supporting and that will keep me rowing even if the going gets rough.  I’m looking forward to the start now and am determined to get to the finish successfully in record time.”

There are 15 boats and 38 competitors in all taking part in the Race which begins in June this year from Monterey, CA, with crews from nine different countries including the UK, US, Australia, New Zealand, Netherlands, Canada, France and Ireland.

Bethune concludes, “I remain forever grateful for all the support Earthrace had from amongst the marine community – we would never have achieved what we did without it.  I am so proud that Daryl’s boat will carry the Earthrace logo out over the oceans once again and I urge anyone in the marine business that can support him whether financially through sponsorship or by offering goods and services that will help him with his challenge to get in touch with him now.  It’s an incredible opportunity to be associated with a great adventure, an amazing man and two great causes.”

Earthrace Conservation
The oceans cover over 70% of the earth’s surface and the scale of the problems and issues being faced by marine mammals and the habitats they live in are immense.  Earthrace is a powerful mix of direct action, knowledge and expertise, education, and most importantly, passion, which we strongly believe will grow our organisation into one of the most effective marine conservation groups in the world.