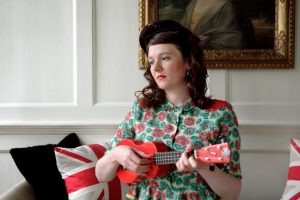 Singer and musician Katy Carr typically dresses for her performances in 1940s vintage outfits, but this is more than a fashion passion: it underlines her profound purpose, to tell the story of the struggle of Poland for independent nationhood before, during and after World War II.

Katy is continuing to take the freedom message to the 2000 generation – youngsters born in the new millennium – through a series of moving ‘outreach’ sessions that draw school students to ‘live’ the most critical historical moments. 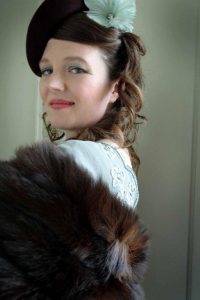 In her already enviable recording career, Katy owes much inspiration for her lyrics and arrangements to the rebirth of the Polish nation after its decades of anguish. Her projects for 2014 will draw further on her Polish roots and her connections with the Polish Diaspora in London and the rest of the UK.

Daughter of a Polish mother and Anglo-Scottish father, Katy was raised in the Midlands city of Nottingham, and her Polish heritage dominates both her personal and professional life. As a young girl, she had a somewhat romantic idea of wartime as all dancehall glamour and daring feats of aviation – she had posters of US pioneer pilot Amelia Earhart on her bedroom wall – but soon was touched by knowledge of the deep suffering that war and dictatorship bring.

She is particularly keen that the lessons of Poland’s suffering and struggle be understood by adults and children of all racial and religious backgrounds.

She told us: “My plans for 2014 are centred on commemoration of the events relating to the Polish experience in the Second World War, and leading on from the topics raised in my album Paszport.” 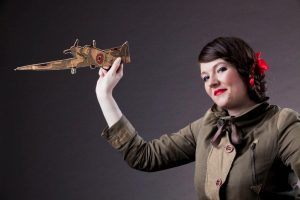 Katy Carr is an aviation enthusiast

Paszport was her fourth album, released in the UK and Poland in late 2012, to coincide with those countries’ Remembrance Day and National Independence Day respectively. It derives its title from a poem by Jerzy Harasymowicz, with the lines “Masz paszport, więc jesteś, ” which means “You have a passport, therefore you exist.”

Themes of the recording are the story of a young boy who used an ingenious ruse to escape from Auschwitz, the 1.8m Poles who were exiled to Siberia, the torment of pilots who were ordered to bomb their own cities, and stories of forlorn love. 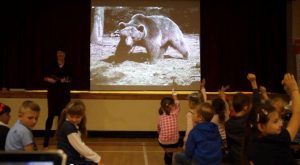 Critics impressed by the album’s mixture of styles and sentiments dubbed her “the Polish Björk” after the multi-talented Icelandic singer and composer.

Paszport tells too of Wojtek the Soldier Bear – an orphan cub given a rank and serial number when he was adopted as a mascot by Polish soldiers training in the Middle East ahead of the assault on German defences at Monte Cassino. After the battle, Wojtek was shipped from Naples to Scotland in the company of some of the troops, and he died in Edinburgh Zoo in 1963.

To commemorate the 70th anniversary of the Italian operation, Katy (who unusually for a popular entertainer is a qualified pilot) and her group the Aviators will take part in performances from May 2014 in conjunction with the unveiling of Wojtek the Soldier Bear memorials in Edinburgh, Krakow and Monte Cassino. She will issue a special single of the song Wojtek which she has written about the remarkable bear.

Under what is known as the Heart Poland Building Bridges schools project, Katy and her film director collaborator Hannah Lovell take songs, patriotic stories and creative enterprises to Polish speakers and World War II veterans of other backgrounds, and increasingly to the young generation.

Heart Poland has involved more than 2, 000 British school children. It developed from what Katy called the Escapologist Tour (a name inspired by that daring escape from Auschwitz) in which Katy travelled to retirement homes across the UK to listen to tales of the war-time experiences of British and Polish pensioners. She met the escapee Kazimierz (Kazik for short) Piechowski in his 91styear. He told how he had been transported to the camp, run by the sadistic Rudolf Höss, for being a member of the Boy Scouts (an organisation the Nazis distrusted). In 1942 Kazik and three comrades stole SS uniforms and in disguise drove in the commandant’s own car past the camp guards. Mr Piechowski survived the war only to be imprisoned for seven years by the Soviets.

This led Katy and Hannah to produce a 25-minute documentary,  Kazik and the Kommander’s Car, which when shown to children evokes a strong, sympathetic response. Katy and her co-workers encourage the boys and girls to relate the story to multiculturalism, tolerance, and respecting cultural differences. Hannah films the responses of the children as they sing along to the music on screen and to Katy playing the ukulele.

Often the children take up pencils and paint to make drawings inspired by Kazik’s story, as they did recently at three Enfield schools, and at the Polish Saturday School in Belfast.

Short video summaries are made by Hannah of the outreach days and posted on Katy’s YouTube channel,  www.youtube.com/katycarrescapologist.

A packed 2014 is in prospect: in August, Katy will release an album of Warsaw songs to commemorate the 70th anniversary of the Warsaw Uprising. On September 1, marking the 75th anniversary of the start of World War II, she will issue her fifth album entitledPolonia. This “will be centred on the love that has been generated for my album Paszport, and the admiration and loyalty of those people from Poland and Polonia (the Polish Diaspora) who have been connected with promoting world peace over the last 1, 000 years. This journey of historical discovery about this side of my Polish roots has become extremely exciting to me!”

This year will also see her set up a music foundation in Poland,  and there will be collaborations with the Kresy Siberia Foundation. The multi-ethnic, multi-religious foundation runs a ‘virtual museum’ dedicated to the fight against Soviet and German forces for freedom and survival of people in eastern Poland (borderlands known as Kresy) and in forced exile during World War II.

Katy will be playing in, and visiting, many places across the Diaspora including Canada, New Zealand, Australia, Israel, Mexico and the US.

Her ability to lead projects she attributes to her involvement as a teenager in the Air Training Corps, where she attained the rank of warrant officer, alongside gaining the Duke of Edinburgh Gold Award. The Royal Air Force awarded her with a Flying Scholarship in her late teens, enabling her to fulfil her dream of becoming an aviator. 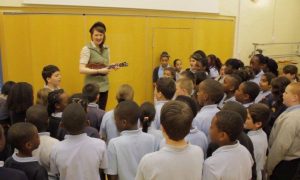 Hannah Lovell works closely with Katy, directing the music videos and creating visual projections for her concerts. Hannah said: “My role with the outreach work includes helping share Kazik’s story, and more stories of the Polish experience in World War II which have inspired Katy’s songs on her Paszport album. I introduce the screening of Kazik and the Kommander’s Car documentary, and project the specially gathered archive footage from the RAF Museum in Hendon (featuring fighter pilots and Spitfires in World War II), the Polish Institute and Sikorski Museum (Wojtek the bear and pre-war 1930s Poland), and the Warsaw Uprising Museum (resistance fighters in the Warsaw Uprising), as well as visuals I have specially created to accompany Katy’s songs and the discussions she leads.”

Such work led to Katy being presented a year ago with the Polish Daily Award for Culture, while on the musical front Paszport was her passport to a nomination in March 2013 as best artist for the Songlines Music Awards 2013, alongside Angélique Kidjo (the winner), Seth Lakeman and Ravi Shankar.

Among her songs are Motylek, about the Polish pilots who fought in the Battle of Britain especially squadron 303, and Mała Little Flower about Polish resistance fighter Irena Gut Opdyke who saved the lives of 12 Jews by hiding them in the basement of an SS officer’s house.

What a great post, thank you. Katy is indeed a wonderful ambassador for Poland, for Britain, and for the near past. One of the songs on her next album is about the Polish-born Countess who became the first woman to work for Britain as a special agent in WWII, Krystyna Skarbek, aka Christine Granville – who was the subject of my last biography. Coincidentally I have blogged about Katy’s songs and inspirations for tomorrow’s ‘The History Girls’ blog:http://the-history-girls.blogspot.co.uk/