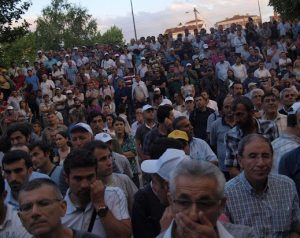 KESK members gather outside a courthouse following the arrests in 2012

On the eve of the trial of 502 trade union members in Turkey, the ITF’s acting general secretary Steve Cotton has written to Turkish Prime Minister Recep Tayyip Erdogan to condemn rights abuses in the country.

The workers face charges dating back to 2012, when KESK members held a strike and demonstration in Ankara. This is just the latest attempt to criminalise KESK and BTS, and follows earlier show trials in 2009. On this latest occasion thousands of public sector workers attended the protest, which was held to highlight opposition to the law on unions and an amendment to the law on education.

The event ended violently, and two demonstrators were severely wounded as a result of police actions. Despite a complaint being lodged against the officers for damages, no criminal proceedings have taken place.

The letter also refers to other trade union rights violations in the country, which have been discussed at the International Labour Conference, the annual meeting of the International Labour Organization, in Geneva. Cotton urges the Turkish government to: “immediately release all the union members arrested under unproven connections to illegal organisations, lift all bans on meetings and demonstrations, and to abide by its obligations to secure the human and trade union rights and freedoms of its workers”.

ITF inland transport secretary Mac Urata said: “This is one of the highest numbers of defendants ever tried – simply because workers have protested against national legislation being used to curtail their rights. The right to freedom of association and of expression must not be crushed, and we join with the global labour movement in condemning this legal action in the strongest possible terms”.