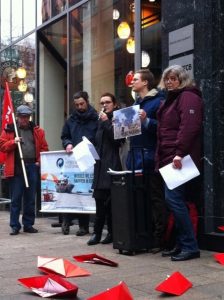 Hamburg,  7 February 2014 – Today Member of the European Parliament Sabine Wils (GUE/NGL) and the NGO Shipbreaking Platform have protested in front of Hamburg-based ship owners against their substandard practice of beaching end-of-life vessels in South Asia.

“Shipbreaking on beaches in South Asia is a highly dramatic practice which puts human life and the environment in danger. Of course, the City of Hamburg must show its responsibility – both as a location of the maritime industry and as the largest shareholder of Hapag-Lloyd. The City is very well able to influence the social and environmental standards of state or partly state-owned companies and to make sure that they set good examples. The City of Hamburg should immediately meet with Hapag-Lloyd and work on a sustainable solution for ship recycling”, says Norbert Hackbusch, the Left Party’s expert for port policy in the Hamburg Parliament.

“The Hamburg Government stresses in its answer that the German commercial fleet was amongst the youngest and most modern fleets in the world. However, the Hamburg Government is wrong in saying that ship recycling was therefore of no concern for German ship owners. At least 68 German end-of-life vessels were sent to beaches for breaking in 2013, making it the second worst country in Europe after Greece. Usually, the sale is coordinated by a middleman who sometimes guarantees the ship owner that he will further operate the ship. In fact, the ship goes almost directly for breaking in South Asia. It would be naïve to believe that ship owners are not aware of what is going on”, explains Patrizia Heidegger, Executive Director of the NGO Shipbreaking Platform.

“The new EU regulation on ship recycling, which has just entered into force, is toothless in one decisive aspect. By simply flagging out, ship owners can circumvent the regulation. Already today, close to three quarters of all European end-of-life vessels going to South Asia do not fly the flag of an EU Member State but a flag of convenience, such as Tuvalu, Comoros or Saint Kitts and Nevis. This is why we urgently need a financial mechanism, such as an economic incentive for clean and safe recycling. Different models are possible, for example a financial guarantee for ship owners, which will only be reimbursed if their ship is recycled in a clean and safe way. The European Commission is currently working on a list of compliant ship recycling facilities that must apply the highest environmental and social standards”,  says MEP Sabine Wils (GUE/NGL).