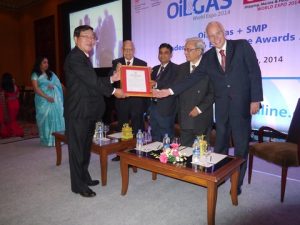 Mumbai – ClassNK Chairman and President Noboru Ueda was honored with the Global Lifetime Achievement Award at the Shipping Marine and Ports 2014 Leadership & Excellence Awards on 10 February 2014 in recognition of his outstanding contribution to the development of the maritime industry. The awards ceremony is held every two years by Jasubhai Media in conjunction with the SMP World Expo to recognize excellence in such fields as innovation, safety, and education within the maritime industry. The awards ceremony was held at the Lalit Hotel in Mumbai, and was attended by 160 representatives from throughout the Indian and global maritime industry.

Speaking on the occasion, Mr. Ueda said: “I am truly honored to receive this award, and I would like to express my sincerest gratitude to the SMP Awards committee. Over the past some 45 years working in the maritime industry and six years at the helm of ClassNK, my goal has been to make ClassNK fulfill its mission of ensuring the safety of life and property at sea and protecting the marine environment, as well as supporting technological innovation in the maritime industry. For me, this award symbolizes the recognition of the industry for the work we are carrying out at ClassNK, and for that I am truly grateful.”

Noboru Ueda joined ClassNK in 1969 and was elected to Chairman and President in 2008. Under his leadership, ClassNK expanded its service network by 33% to 129 offices across the world, and the ClassNK register grew by over 65 million gross tons, becoming the first classification society in history to have over 200 million gross tons on its register. Mr. Ueda was responsible for establishing ClassNK’s Joint R&D for Industry Program in 2009, which has provided research funding and support to more than 260 joint maritime R&D projects since its inception. In addition to his leadership of ClassNK, Mr. Ueda served as Chairman of the International Association of Classification Societies (IACS) from July 2010 through June 2011, and most recently assumed the role of Chairman of the Association of Asian Classification Societies (ACS) in January 2014.