Flash: Greek real GDP down 3.7% in 2013; a much better than initially expected reading

Greek real GDP down 3.7% in 2013; a much better than initially expected reading

Greece’s stats agency, EL.STAT, released earlier today its quarterly national account statistics for Q4 2013. According to the flash report, Greek real GDP growth declined by 2.6% YoY, bringing the full-year pace of GDP contraction to -3.7% from -6.4% in 2012.  Over the 6-year period 2008-2013, cumulative real GDP losses amounted to ca 25.5%, in what has proven out to be one of the most severe and prolonged recessions in recent history.

Despite the negative YoY GDP reading in Q4 2013, the pace of output contraction for the full year 2013 has been much less severe than expected initially. Market forecasts in the beginning of last year were for a GDP decline north of -4.5%, not least because of the huge carry-over from the 2012 recession (i.e., between 3.3 and 3.5ppts). The flash report does not provide a breakdown of Q4 GDP data, but the revised full-year reading (provisional data) is likely to show some improvement in (the still contracting) domestic demand dynamics along with a bigger-than-initially expected positive contribution from net exports.

Undoubtedly, strong tourism revenue has played a very important part in the latter development, with relevant receipts estimated to have added around 1ppt to full-year GDP.  The -3.7% GDP growth reading for 2013 compares with a -3.5% forecast produced by our Greek GDP Nowcasting model last November, but the most recent improvement in a range of key indicators of domestic economic activity (e.g. Nov retail sales, Dec. industrial production and Dec. new car sales) raises the prospect for a small upward revision in the provisional Q4 GDP report due in mid-March.

Overall, a better-than-expected reading for 2013 full-year GDP, helping to solidify expectations for a bottoming-out of the domestic recession and a shift to positive growth rates as early as this year. 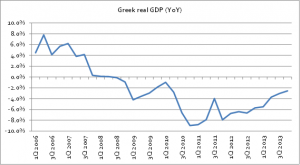