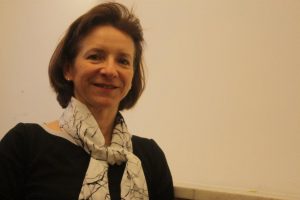 All eyes at IMO are on the ‘triple I’ – the youngest sub-committee of the International Maritime Organization. The III, the subcommittee for Implementation of IMO Instruments, is the successor to the subcommittee on flag state implementation, and is charged with encouraging the 170 member states to put IMO rules and guidelines into practice efficiently, effectively and in a timely manner.

This is one of the special interests of Anna Wypych-Namiotko, permanent representative of Poland to the IMO since September 2013. While Ms Wypych-Namiotko is a newcomer to IMO, she is thoroughly versed in the maritime world, as a former serving officer at sea, an administrator of port state control, a government minister, and a facilitator of IMO policies in Poland.

The transition of the Implementation of IMO Instruments Code – which provides the global requirements for nations to meet their obligations as flag, port and coastal states – from voluntary to mandatory status will test the determination of countries to adhere to IMO principles. Ms Wypych-Namiotko is familiar with the need for a constructive approach to IMO decisions, having participated in the voluntary IMO member state audit scheme.

Her own achievements in this regard date back nearly 20 years: from 1995 she was national coordinator of Port State Control in the Maritime Office of Gdynia – in the very early days of the Paris Memorandum of Understanding on port state control. She took a leading role in the development of the system covering Gdańsk, Gdynia and small ports in the eastern part of Poland.

IMO Secretary-General Koji Sekimizu has launched as the 2014 World Maritime Day theme, “IMO conventions: effective implementation.” In doing so, he declared: “An IMO convention is only worthwhile and meaningful if it is effectively and universally implemented.”

The biennial IMO assembly in December 2013 adopted the III Code, with a framework and procedures for the IMO member state audit scheme. The mandatory audit scheme is due to come into force by 2016. IMO will offer assistance, where required, for states to meet their obligations fully and effectively.

Ms Wypych-Namiotko is meanwhile keeping a close watch on the impact of international anti-pollution changes aimed at reducing sulphur emissions from shipping, especially because of her country’s dependence on the Baltic Sea, a very sensitive area environmentally. The Baltic Sea is among the so-called emission control areas that are subject to the most stringent controls on sulphur emissions, and the tighter conditions will cover short sea shipping this year.

With the salinity of the Baltic Sea lower than many other sea areas, ship emissions can have severe effects on biodiversity, so Ms Wypych-Namiotko understands the enthusiasm for special regulations while expressing caution over the difficulties of putting them into effect.

Rules mandating fuel switching when a ship enters a special area could increase costs for a ship owner or operator by 60% to 70%.

Ms Wypych-Namiotko said that new technology needs to be further developed for dual fuel operation, for scrubbers to wash sulphur dioxide out of exhaust gases, and even production of fuel with a reduced quantity of sulphur. “We are watching how the market of cargo transport will react to these new regulations. The rest of the world [outside the special areas] has more time for adoption of these regulations, up to 2020.

“Like other Baltic countries, we accept the general course of new implementation of pollution prevention measures. We are looking at how the new regulation is going to be enforced, and what this will mean for business. We shall see what trends will appear.”

She is pleased that progress is being made towards adopting the proposed Polar Code to apply widely to shipping. In fact, with growing attention focused on the risks of voyaging through icy waters, it seems there will be a good opportunity to promote Polish ports, all of which are year-round ice-free.

What is the attitude of the Polish government to the maritime industry? Ms Wypych-Namiotko underlines that the development of ports is dependent on the efficiency of the rest of the transport infrastructure, particularly roads. “We have made a huge step in improving our transport network: nobody would invest in Polish ports if the policy were not clear, and we are going to develop the transport infrastructure, especially on the north-south axis. Earlier the European Union had been dedicated to the west-east development of transport, such as highways between Germany and east Europe. Now more importance is attached to the north to south connections, for instance from Poland to the Czech Republic and Slovakia.”

The construction of a big container terminal in Gdańsk was a signal investment. Deepwater Container Terminal Gdańsk, which opened in June 2007, has become a hub port for central and eastern Europe and Russia. The terminal handled 1.1m teu in 2013, and has a target capacity of 4m teu. In 2010 Maersk extended a regular oceanic container link from China to the Port of Gdańsk.

At Gdynia, Hutchison Port Holdings has since 2005 transformed the former shipyard into a modern container handling facility.

“We are really proud of the way the condition of Polish ports has developed, ” said Ms Wypych-Namiotko. “Despite the difficult economic crisis last year we observed positive results in our ports: a record tonnage throughput in 2013, up 10% on 2012.”

She says that the two universities for seafarers, maritime professionals and naval officers continue to enjoy good results. In 2013, the academies at Szczecin and Gdynia graduated some 1, 800 men and women in exams based on the requirements of the International Convention on Standards of Training, Certification and Watchkeeping for Seafarers (STCW).

Poland, a considerable supplier of labour to ships under many flags, now has to address the question of terms of seafarer employment and of the domestic ship register. This has become an urgent matter with the advent of the Maritime Labour Convention 2006, which establishes minimum working and living standards for all seafarers working on ships flying the flags of ratifying countries. It enters fully into force in August 2014 – the first 30 signatories are already putting it into effect.

“The Polish law regarding seafarers is very old, and we have to change it, ” insisted Ms Wypych-Namiotko. Under the spotlight is the cost of regulations including those covering insurance for seafarers and tax, compared to the cost of those factors in open registries. Poland needs to change some regulations for shipowners, and some elements of maritime transport state aid, Ms Wypych-Namiotko believes.

“We have a tonnage tax law, but there are some extra regulations necessary to give our owners the possibility of employing Polish seafarers – to bring the Polish flag under the same regulations as apply to European competitors.” Warsaw was authorised by the European Commission to introduce a flat-rate tax regime based on fleet tonnage, from 2011. This enables shipping companies to pay tax at a flat-rate based on the tonnage of their fleet, rather than corporation tax.

Ms Wypych-Namiotko says that with conditions improved for vessels registered under Polish flag, Poland will be in a better position to seek membership of the 40-strong IMO council. “We have good record in maritime training, ports, ship construction and other aspects but frankly speaking there is a black hole in the matter of the cost of seafarers’ employment and conditions.”

After spending five years at the Maritime Academy in Gdynia, Ms Wypych-Namiotko graduated from the faculty of navigation, with a Master of Engineering degree.

She went to work in 1980 as a deck officer with Gdynia-headquartered Polish Ocean Lines and with Chipolbrok, the Chinese-Polish Joint Stock Shipping Co. She was at various times chief officer and officer of the watch on general cargoships and semi-containerships, and a management executive.

Chipolbrok was established in 1951 by the governments of China and Poland. It was for China at the time a “window on the world” – being the first foreign-invested joint venture registered in the country after its revolution of 1949. The company transports complex, oversize and heavy-lift cargo such as factory equipment for projects in China. With a head office in Shanghai and branch office in Gdynia, Chipolbrok owns a fleet of 20 modern, multi-purpose vessels.

Chipolbrok afforded Ms Wypych-Namiotko an early glimpse of the importance of China to the global economy. She was thus delighted when in December 2011, as undersecretary of state at the Ministry of Transport, Construction and Maritime Economy, she took part in a delegation to Beijing and Shanghai led by Bronisław Komorowski, president of Poland.

Ms Wypych-Namiotko said during the visit: “Poland has been and will be a stable partner for China in the European Union, the Baltic Region, and central and eastern Europe. The economic and intellectual potential in Poland gives a good opportunity to develop business relations and implement Chinese maritime projects in Poland.”