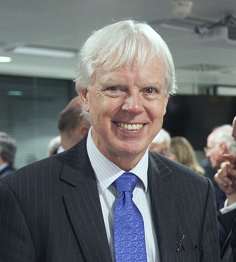 Senior names from across the UK shipping sector attended a reception at the UK Chamber last night in honour of former Director-General Mark Brownrigg.

Eight former UK Chamber Presidents, members of staff, representatives from Government and figures from across the sector were on hand to pay tribute to Mark’s 41 years of service.

UK Chamber President Kenneth MacLeod addressed the reception and said: “The UK shipping sector was in decline and we needed someone to fight for it. Many took part in that fight, but Mark was here in the difficult times, and was here when things began to get better. I suggest that is no coincidence.

“Through the 1990’s, Mark made it his business to lobby for a national maritime policy, centred around a new tonnage tax regime. Many thought it couldn’t be done, but Mark fought and he fought hard.

“What followed was the implementation of a tax regime that saw the size of the British fleet rise from 7 million dead weight tonnes, to almost 20 million in the space of just a few years. That is a staggering achievement.”

Mr MacLeod concluded: “On behalf of the entire industry, those who know of your achievements, and those who don’t, thank you. You have committed your life to this industry, and the industry is much, much better off for it.”

COA Report Reveals Increased Use of Bamboo for Container Floors