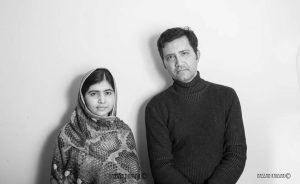 Who is Malala?  That was the chilling demand of a Taliban gunman who held up a school bus in the Swat Valley of Pakistan in October 2012. From the moment he shot 15-year-old schoolgirl Malala Yousafzai, the world knew exactly who she is, and anxiously followed her story as she was being treated for severe head wounds before being flown to hospital in the UK, and then starting school in Birmingham. To the chagrin of her assailants, the near-fatal shooting lent all the more publicity to her campaign for girls’ education. 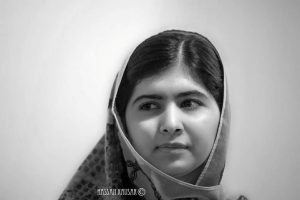 To millions of people, her first name alone now conjures up her story and all her courage. As with all role models, people thirst to know even more about her, and in a series of close-up pictures, UK-based photographer Hassan Kausar has added tender insight into “who is Malala.”

He captures her intensity and her innocence, and above all her quiet determination to carry on fighting for her cause.

Hassan was chosen to document in photos an exclusive interview with Malala by his broadcaster Nadeem Saeed for Voice of Russia radio, an appointment that had taken many weeks to secure. Hassan’s images have just been on public view as one of his contributions to a group art exhibition at Southfields Gallery, Wimbledon.

“It was a great privilege to meet this girl, ” the photographer told us. He found the young activist “very humble” during the interview, and there were moments when she seemed a bit lost, perhaps because she gets so much attention from media people. “This young girl has to go through all these interviews.” 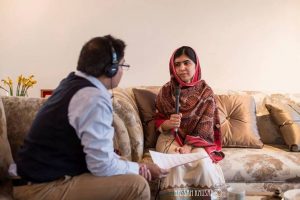 Malala is interviewed by Nadeem Saeed. Photo courtesy of Voice of Russia and Hassan Kausar

Despite that, she was very comfortable and was easy to talk with. “That gave me whatever I wanted photography-wise, ” said Hassan. “I must say that I wish it had been purely a photo-shoot rather than an interview: I could have done even more photographically.”

Wielding his Nikon D600, Hassan took his images mainly in black and white, a format in which Malala’s unpretentious composure comes through acutely. “I wanted to capture her when she was off guard, ” said Hassan.

Hassan switched to colour images to picture her at a raindrop-spattered window, symbolic of her new life in oft-rainy Britain, a long way from the Alpine-like grandeur of Swat. 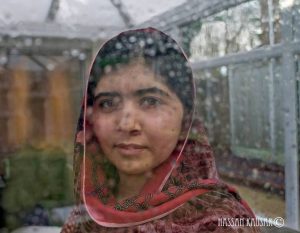 Malala has long spoken out about the right for both genders to education, having been invited to write an anonymous blog for BBC Urdu when she was 11.

Hassan praised Malala’s father, who was present but “gave room for her to express herself.” Her father,  Ziauddin Yousafzai , has long been a social activist, and is now United Nations special advisor on global education, and education attaché at the Pakistan High Commission in Birmingham.

Lahore-born Hassan shares with the Yousafzai family an appreciation of the Swat region, having worked there at one stage as an interior designer in the town of Saidu Sharif.

During the interview,  Malala spoke of her most important immediate objective – to get 10 out of 10 marks for her homework – and said that she aspired to be Prime Minister of Pakistan as the best means of influencing society. She said that she admired the late Benazir Bhutto and “I thought that I must try politics, not only to help Pakistan but also to show girls that they can also run their country, they can also serve their country through politics and they can also do other jobs, other than becoming a doctor or a teacher.” 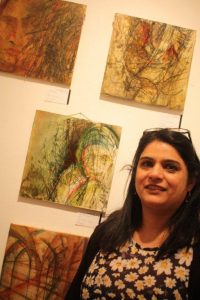 Irtiqa with her mixed media works.

Asked to name her favourite place, she replied: “Swat, the most beautiful place I have ever seen in my life and a paradise on earth.”

Photography initially was a hobby for Hassan, alongside his profession of architect and interior designer. He has lived in London for many years and started his own business, Akasi Photography. At the Southfields exhibition he showed a selection of his work, including dramatic cityscapes of Paris, New York and elsewhere. 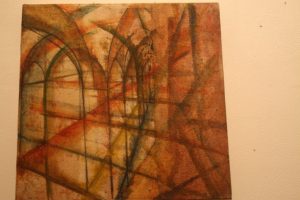 Mixed media work on the continuity of lines. By Irtiqa.

Also presenting work at Southfields was Irtiqa, the wife of Interviewer Nadeem Saeed.  Irtiqa – her name means ‘evolution’ – displays a deep sensitivity to the female life-force by means of her mixed media canvases. These show women’s faces emerging strong and resolute through thickets of obstruction. The concept might even be interpreted as a metaphor for Malala’s struggle. 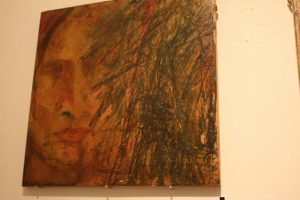 One of Irtiqa’s works featuring the female mind.

Irtiqa told us that she is conveying the layers of women’s feelings that differ from those of men and the way they respond to different circumstances. Some of her works are more of an architectural nature, suggesting the continuity of lines into places we do not see. Irtiqa once taught in Pakistan at Bahauddin Zakariya university, Punjab, as assistant professor of painting, and now works with autistic children in Britain. She has lived in London for the last eight years. 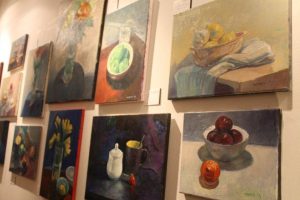 The Voice of Russia interview with Malala can be heard at http://indian.ruvr.ru/2014_02_06/MALALA-INTERVIEW-EXCLUSIVE/

Southfields Gallery info is at www.southfieldsgallery.com