Collapse of time in Chios… 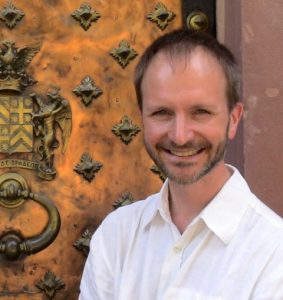 Sections of the Greek people have been plunged into a time maelstrom by the savage austerity measures imposed since the 2010 sovereign debt crisis.

In the island of Chios in particular, tragedies of massacre, famine and enslavement that happened a long time ago now seem “very present” to citizens who have been hurt by cuts at the behest of the European Union and International Monetary Fund.

Perceptions of time have been telescoped to enfold memories from the turbulent history of the Aegean island. “In Greece, people are talking about these (recent crisis) events as The Great Hunger, ” Nicolas Argenti, senior lecturer in social anthropology at the UK’s Brunel University, said in a presentation as part of the Hellenic Observatory Research Seminar series.

“When they say the Hunger has returned, it is the same as saying the Occupation has returned.” The island surrendered to Nazi Germany in May 1941 and remained under its control until 1944.

Dr Argenti told his audience at a venue at the London School of Economics that the sovereign debt crisis that has engulfed Greece since 2010 is not only shaking people’s belief in their government and their future, but it is fundamentally reshaping people’s experience of the past and its relation to the present.

He was speaking to the theme: “Crisis and famine in island Greece: sovereign debt, political violence and topologies of memory in Chios.” Dr Argenti, who has family connections with Chios, carried out two years of research there and plans to return as part of an ongoing project to examine the impact of the crisis.

He said that his interviews for the project indicated that for the islanders “time itself seems to be eroding. People seem now to talk as if the traditional historical process that supported time is collapsing. Ghosts from the past were coming back to haunt the present.

“Chios was very badly affected during the Occupation. Apart from Athens, it was the place where famine was the worst.”

His main interview was with a lady named Maria, in her eighties. For people like her, old events were resurging into the present “and they find themselves living the past again.”

People were seeing the question of the Troika (the EU, the European Central Bank and the IMF which  command conditions for  bailout loans) and reducing it to Germany, and referring to it simply as “Angela Merkel.” This interchangeability was not simply the slogan of left-wing activists in Athens, but had found its way into grass-roots consciousness. “Somehow, there is the connection between the invasion of World War II and what is going on now.”

A local politician had told him: “What the Germans failed to complete by military means in 1945, they are now returning to complete by other means.” Dr Argenti said: “Across the political spectrum they share this anxiety.”

They felt the weight of the Smyrna catastrophe (the fire in the Anatolian port city that led to the evacuation of 200, 000 Greeks to Chios and elsewhere) of 1922 and the killing of thousands of fighters and citizens on the island by Ottoman troops during the Greek War of Independence in 1822. The shattering events were felt “not explicitly, but you can see it between the lines.”

The bones of the victims of the massacres were still to be seen in the monasteries of Chios, and the desecration had been kept intact. “You get the strange sense that these massacres did not happen so long ago.” School children are taken to the sites of the massacre, “so they internalise these things.”

The 1822 bloodbath and dispersal of much of the population severely reduced the island’s commercial and maritime power.

After the exodus of Greeks from Smyrna to Chios in 1922, some 20 years later people were fleeing in the opposite direction to escape wartime famine. These desperate short crossings to Turkey in small boats played a role in the island’s story.

Maria, the interviewee, had lived during the famine and occupation. Her family had tried to make the crossing, but the Turkish captain was drunk and the boat hit the rocks.

As he tried to refloat the boat everyone was thrown into the sea and all but two family members drowned. Maria subsequently recalled that when she was a child, her aunt had a dream about three cypress trees being cut down, and she begged her brother not to try to make the sea crossing.

Later the significance of the aunt’s dream became clear. It evoked the monastery where stood three cypress trees. During the sacking of the monastery, legend had it that a young woman took refuge inside. A Janissary (Christian soldier serving the Sultan) burst in and tore her dress, which revealed a crucifix identical to the one he was wearing. The woman, her fiancé and the soldier attempted to flee together, but all three were killed and turned into cypress trees.

Now in news broadcasts we hear Angela Merkel, who reminded Maria of images of Hitler in the way she shakes her fist and uses a hectoring voice. Maria’s anxiety was that the Communists were going to gain renewed support and there was going to be another civil war in Greece.

Dr Argenti went back to see Maria in February 2012, four months after his initial interview, and she started talking even more about the past. She fears the younger generation will move to the radical left, as was the case after the war. (Most Chiots, especially the younger ones, are more worried about a lurch to the right).

She talked about increasing numbers going to a centre for free meals, and pensions being reduced. “Soup kitchens remind people in this startling way of the German occupation, ” said the lecturer, who added that by 2013 such facilities were feeding more than 600 people on the island.

The feeling of the return of the Hunger was emphasised by her grand-daughter, who is at university on the mainland, telling her that people no longer throw away food, but tie it to the side of the bin where it is rapidly grabbed by those in desperate need of a meal.

It was not just the older people who were experiencing this ‘collapse of time.’ People who had not lived through the earlier events such as entrusting their fate to Turkish sea-captains were talking about them to those who were younger.

Collective memories of earlier periods of political violence might stretch as far back as a revolt by Chios in ancient times – against punishing taxes that had been levied by Athens.

Dr Argenti argued that it was not so much trauma that collapses time “but rather rapid social change and crises that reveal the chaotic topology of social temporalities, underscoring the limitations of dominant Western models of linear time.”

The Hellenic Observatory meeting, on February 25 2014, was chaired by Dr Vassilis Monastiriotis, associate professor of political economy at the London School of Economics.

The seminar series provides a forum for academic and policy research addressed to student and academic audiences in London, and to the wider Greek community.