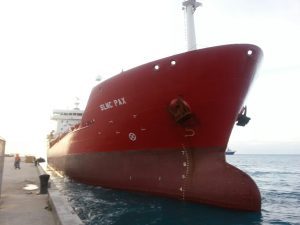 The vessel, newly named MT SLNC PAX, owned by Schuyler Line Navigation Company, LLC (SLNC), is classified as an Oil tanker and Chemical Tanker with IMO type II & III, and will be operating in the US-flag cargo preference service.

Russell Paret, President of SLNC said, “We are very pleased to be working with ClassNK as they have been knowledgeable and diligent in issuing class certificates for the MT SLNC PAX in the US registry. Schuyler Line looks forward to continuing our relationship with ClassNK.”
ClassNK was granted the authorization to carry out statutory survey for US-flagged ships from the United States Coast Guard (USCG) in 2011 for the first time for the Load Line (LL) and Tonnage (TM69). It was granted extended authorization on December 2012, enabling ClassNK to render a full range of services for survey and certification for the SOLAS, MARPOL and AFS conventions, as well as to perform ISM Audits on behalf of the United States flag administration. This service commenced with the classification of the MT SLNC PAX.
ClassNK opened its first US office in New York in 1962. The classification of its first US-flag ship is recognition of the company’s solid reputation as a society in the US market.

VIKING goes against the flow in a tight global market