Wood blockbuster at the Royal Academy… 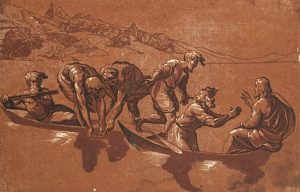 As European imperial powers were entering the 16th century, building on the triumphs of the great navigators by exploring and exploiting the Americas, a revolutionary new technology at home was transforming printing: the chiaroscuro woodcut.

This was more than just a new means of artistic expression: it was seized upon at the highest level for propaganda purposes, just as mass communication via printed books was becoming commonplace.

Pioneering artists fuelled the boom with their new colour prints, integrating woodblocks inked in different colours in a process that made play with light and shade – chiaroscuro – to give greater pictorial quality and depth than earlier plain blocks.

The first known example came from Hans Burgkmair the Elder, with his depiction of Emperor Maximilian on Horseback, 1508, commissioned in the year of the ruler’s coronation, and a companion print of St George and the Dragon. 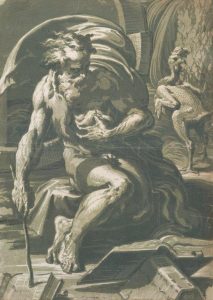 His compatriot, the Renaissance painter and printmaker Lucas Cranach the Elder (1472-1553) leapt on to the technique too, and they seemed to have competed for the honour of being first in the field.

Maximilian I (1459-1519) was sorely in need of an image boost, and on a Europe-wide scale. Son of the Holy Roman Emperor Frederick III and Eleanor of Portugal, he was never crowned by the Pope, having been blocked by the Venetians as he tried to make his way to Rome. He had lost Milan to the French and was defeated by the Swiss Confederacy in the Battle of Dornach. Even more frustratingly, he had tried in vain to whip up a pan-German crusade against the Ottoman Empire.

Maximilian needed to re-assert his reputation. The depiction of him as a bold horseman – which he certainly was – in the new-style woodcut was just the thing. “This print was a cheap way of spreading his image throughout the Empire, ” says curator Dr Arturo Galansino of the Royal Academy, where the exhibition Renaissance Impressions: Chiaroscuro woodcuts from the Collections of Georg Baselitz and the Albertina, Vienna runs until June 8 2014. His joint curator for the show is Dr Achim Gnann of the Vienna institution.

To illustrate the new three-dimensional media of the time, more than 100 rare prints have been selected for the Royal Academy exhibition.

The print of St George reflected Maximilian’s support for the Order of St George founded by his father, and his establishment of the Brotherhood of St George to raise funds for the thwarted campaign against the Turks.

Cranach, who was court painter in Wittenberg to the Elector of Saxony from 1505, was anxious not to lose ground.  He backdated two of his prints to 1506, in an effort to assert that he, rather than Burgkmair, invented the chiaroscuro woodcut.

The woodcuts of the day were strongly allegorical, with copious classical and Biblical references, unsurprising as many are based on the output of the great Renaissance artists including Parmigianino, Raphael and Titian.

Drawing on toned instead of white paper, the chiaroscuro artist needed to work closely with the craftsman carving the woodblock. Seizing on the experimentation, other German artists, including Hans Baldung Grien and Hans Wechtlin from the circle of Albrecht Dürer, created great examples, and the technique quickly caught on in Italy and the Netherlands.

Ugo da Carpi, another person to claim the invention, cut his own woodblocks in Venice, making his mark with such works as the red-hued, white highlighted The Miraculous Draught of Fishes, c. 1523–27,  and the five-block depiction possibly of Archimedes, after Raphael.

Diogenes, a  woodcut by Ugo da Carpi, from around 1525 and after Parmigianino, is printed from three blocks, and shows the ancient Greek known as a cynic, who was said to have lived in a barrel. To the side of the philosopher is a chicken he plucked in response to Plato’s definition of man as a ‘featherless biped’.

In the Netherlands, the highly sophisticated work of Hendrik Goltzius (1558–1617) shone forth, his masterpieces including the dramatic Hercules Killing Cacus, 1588. The son of Vulcan, Cacus was a fire-breathing monster who supposedly lived before Rome was founded in a cave in the Palatine Hill, and feasted on human flesh.

The pastoral landscapes of Goltzius make a relaxing change from the usual themes of the chiaroscuro, but one of the most striking entries in the whole Royal Academy exhibition is a series of six oval panels of gods and godesses, all of the artist’s design. Oceanus sits astride a curling sea-monster, and Thetis rides a seashell chariot, while Pluto confronts a terrifying, raging fire.  Separately, Goltzius portrays a bloated Bacchus, from around 1589-90. 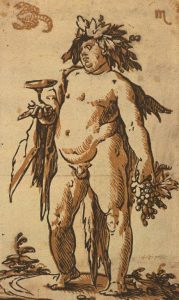 The Vienna  museum and its chiaroscuro print collection originated with a gift from its founder, Duke Albert of Saxe-Teschen (1738-1822); while the German contemporary artist Georg Baselitz, an Honorary Royal Academician, became fascinated with the medium after taking up a scholarship to study at the German Academy at the Villa Romana in Florence.  There, he read the 1957 book The World as a Labyrinth by art historian Gustav René Hocke which opened the door for him to study more deeply the style of the mannerists, and he started in 1965 to collect such works.  Some of his own work has been directly informed by the imagery and technique of these woodcuts.

On behalf of the Academy, Kathleen Soriano said it was a great honour to have Mr Baselitz involved in an exhibition for the second time – he had a retrospective in 2007. The highly respected Ms Soriano is to leave the Academy in April 2014 after five years as director of exhibitions. She will be replaced by Tim Marlow of White Cube in the new role of director of artistic programmes.

Coinciding in part with Renaissance Impressions, which is hung in the Sackler wing, the London Original Print Fair will occupy the main galleries of the Academy from April 24-27 2014. More than 50 international exhibitors have booked space at the fair, described as “a rare opportunity to buy affordable works as well as masterpieces from across five centuries.”

The Board of Oslo Børs approves Tanker Investments for listing