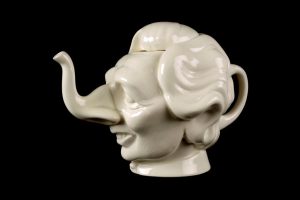 One of the industries that helped fire-up the imperial might of Britain was the manufacture of pottery – at the peak of its success there were more than 4, 000 bottle-shaped kilns emitting smoke and coal-dust into the air of Stoke-on-Trent, the heartland of mass production.

Some enlightened pottery masters used their craft as a call to reform society – notably Josiah Wedgwood in his opposition to the slave trade. Individual potters are still throwing political punches, mainly through unsubtle satire.

A reminder of the past productivity and ingenuity of the potteries has come to London, with an exhibition at the Whitechapel Gallery of historic wares borrowed by the Contemporary Art Society from museums and collections based in the English Midlands. 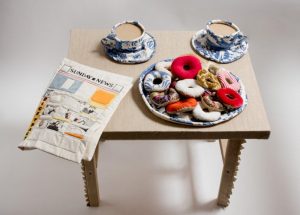 Ceramics from the greats of the modern era, from Picasso to Grayson Perry, take forward in the Whitechapel show the social messages, and there is a matching selection of Pop Art images.

Pottery is today on a much smaller but enterprising scale in Staffordshire: the iconic Wedgwood business went into administration in 2009. It is hoped that the abandoned Burslem Branch Canal will be restored alongside redevelopment of its banks to take in tourism, light industry and arts and crafts. The canal was built to complement the Trent and Mersey Canal in 1805. Substantial volumes of china clay, stone and other materials were brought in by water, and the finished product was exported via the River Mersey and Liverpool Docks.

A 1795 medallion produced by the abolitionist Josiah Wedgwood bore the motto: “Am I not a man and a brother?” More than 200 years later, the modern ceramicist Paul Scott adapts the design of a 1770 cup and saucer to commemorate victims of 21st century slavery, the 23 cockle pickers who died in Morecambe Bay in 2004.

Female Nude at the Beach, 1963. Glazed ceramic plate. By Pablo Picasso. Entrusted to the City of Leicester by Sheila and Richard Attenborough.

It must be remembered though that the pottery industry was a big exploiter of labour. An 1841 parliamentary report quoted many employers as saying that they could see nothing wrong in children eight to 10 years old working a 72 hour week. Some youngsters were put to work at the age of five or six.

Two big white earthenware plates by Pablo Picasso are said to acknowledge his long fascination with masks and primitivism and were made while the clay was malleable. The 1965 plates were “entrusted to the City of Leicester by Sheila and Richard Attenborough to commemorate the lives of their daughter Jane Mary and grand-daughter Lucy Elizabeth who perished together in the Asian tsunami of December 26 2007.”

Political jibes include a Thatcher teapot, and toby jug modelled on Gordon Brown when he was Chancellor of the Exchequer in 2005, with his red budget briefcase marked “stand and deliver!” According to a sentence in a discarded library book that was one of several that no-one seemed to want when the public library was moved from the Whitechapel Gallery, “the sensitivity of the artist turned potter has found stimulus in every age.”

A vitrine titled Trade & Taste informs us that the high output of handmade ceramics in England, Europe and China meant the cross-fertilisation of style, taste and fashion through global trade between the 16th and 18thcenturies. Serial production and decoration of ceramics in Staffordshire hit its height from 1800 to 1880 and meant “people were able to buy English versions of a Chinese idea of British taste for an exoticised East.” 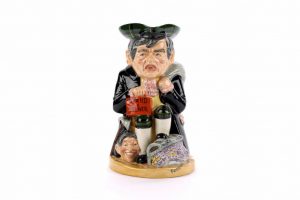 The overall title for the exhibition is The Best is Not Too Good for You, which is inscribed on a 1697 posset (hot milk punch) pot in the collection of the Potteries Museum & Art Gallery in Stoke. This might be a message too from Turner Prize winner Grayson Perry, who made a 1999 large pot called Designer Rebellion  with skateboarding figures.

While Whitechapel does not own a collection, it has a dedicated gallery for presenting public and private collections.

Founded in 1910, the Contemporary Art Society is a national charity that donates works by established and new artists to museums and public galleries in the UK. In 2012, the organisation acquired its first permanent premises at Central Street, Clerkenwell, London.

Pop Art Prints and Pots, a Contemporary Art Society display in Gallery 7 of the Whitechapel Gallery, runs untilJune 1 2014, Gallery 7. Entry is free. The exhibition will tour to Rugby Art Gallery from June 28 –August 30 2014.