Top Posts
The BDI drops down to 1,540; Wets maintain...
John Faraclas of All About Shipping contributes to...
Irene Rosberg addresses the 22nd Parliamentary Intelligence-Security Forum
Ready to hit the water? So are these...
Coach Fall/Winter 2022: A Collection That Feels Like...
Badgley Mischka Fall/Winter 2022: Wearable Sculpture in Ultra-Chic...
Power, philosophy and heroism of central bankers, and...
New superyacht goes up in flames
American Club Circular no.23/22 – EU Sanctions –...
Hot Port News from GAC
Ulla Johnson Fall/Winter 2022: Organic Forms and Nature’s...
American Club Member Alert (August 12, 2022) re...
Witherbys leads the way in digitisation as 5,000...
Home NewsGames and Puzzles How to be a (Lego) weekend shipbuilder

How to be a (Lego) weekend shipbuilder

So many bricks the daunting start

How to be a (Lego) weekend shipbuilder by Jean Winfield, Jeanius Consulting.

For those of us who love shipping, any excuse to find a shipping related hobby is a dream come true so imagine my delight to find that Maersk had teamed up with Lego to create a Lego model of the Maersk Line Tripe E Mc-Kinney Moller. Stood in front of my local store, there she was in the display window – raising the profile of shipping or just a wonderful bit of Danish PR? I wasn’t sure, but as I looked I knew I’d have to buy one and that in doing so I was going to build Lego for the first time in over 30 years.

Lego, despite appearing timeless over its 80 year existence, has undergone somewhat of a metamorphism into a more modern diverse brand as part of the Lego Group. Still owned by the family who started the company in 1932, Lego holds its place as a global enterprise that is now, in terms of sales, the world’s third-largest manufacturer of toys. Sadly the shift towards all things app and android has left more traditional games and hobbies trailing behind, yet Lego has kept evolving and you only have to visit the website to see their forward thinking approach not only with the latest appealing models and characters but their theme parks and recent Lego Movie. 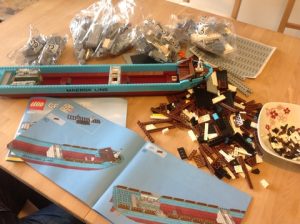 I was surprised to learn that Lego has been selling toy building kits for Maersk ships since the 1970s, so the idea of a Lego ship wasn’t new. This latest version, the world’s largest container ship ; the Triple-E , selling out in less two weeks so I excitedly ordered and joined the waiting list for delivery.

The latest build is not a project for the faint hearted I realised when the large box arrived several weeks later, containing some 1518 bricks and 128 individual stickers and an “expert” level coding.  However despite the enormity of the build, Lego had written both incredibly detailed step by step instructions and conveniently bagged bricks in stages so as not to overwhelm. Announcing the project on my Twitter I realised that I was not alone and there was lots of encouragement and a ‘race’ challenge to complete the ship in less than four hours.

In building phase one, the building of the main elements of the ship, the little touches of detail were endearing. The bulbous bow, the actual working propellers and the internal engines that were even made viewable through a “window” brick – all things that made me realise what a technical Lego feat this had been to create. The instructions, two books worth, were clear, easy to follow and the ship began to take shape, completing the iconic blue hull and MAERSK LINE branding. 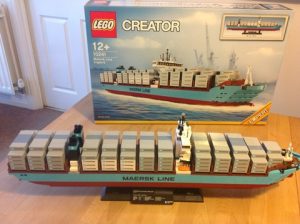 Phase two was the bridge, the funnels again with some lovely detailed touches; comms and navigation equipment and even mini life rafts.  The last part was creating the cargo, rather a labour of love attaching 128 individual stickers to containers with a pair of tweezers, but the devil’s in the detail and the end result was worth it. The two man build team achieving a respectable total build time of 3 hours 45 mins.

The build complete, the model has taken pride of place in our new Jeanius office, a daily reminder of what a great industry we work in and of course a wonderful talking point to engage maritime conversation both our shipping and our non-shipping visitors. I thoroughly recommend.

The model is available from Lego stores and online www.shop.lego.com/en-GB/Maersk-Line-Triple-E-10241

essDOCS completes first operational use of electronic bill of lading…

Will this be Monaco’s first green unicorn?

A big Bonjour to Monaco from Zadig &...