Welcome Luncheon in Honor of US Ambassador to Greece Mr. David D. Pearce 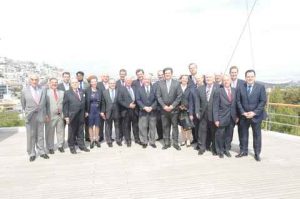 The International Propeller Club of the United States (Port of Piraeus), held a private welcome luncheon in honor of the new US Ambassador to Greece, Mr. David D. Pearce at the Yacht Club of Greece, on March 26th, 2014. This was the first luncheon bringing together the current Board of Governors, the new U.S. Ambassador and the Former Presidents of the Propeller Club.

The Board of Governors of the Piraeus Port chapter of the International Propeller Club of the USA had the pleasure and honor to hold a celebratory Board Meeting with its Honorary Chairman, the Ambassador of the United States of America in Greece, Mr. David D. Pearce. 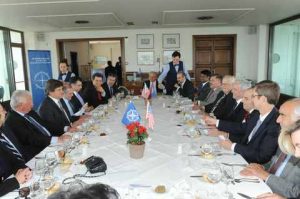 The Chairman of the Club in his welcoming speech stress the strong cooperation of the two nations in the Maritime field outlining the strengths of Greek Shipping and its tight links with the Club. He pointed out that the International Propeller Club of Port of Piraeus is the most populous chapter of the Propeller Club worldwide and he note that its role is to enhance the cooperation of all shipping people aiming to contribute the global efforts of the shipping industry to remain safe and healthy. Mr Xiradakis stressed the importance of the independent shipping activity worldwide and seek continuous support to maintain the industry’s unique competitive characteristic.

During the meeting the Ambassador outlined the importance of Greek Shipping not only globally but also specifically from a US-Greece trade relationship perspective as more than 40% of the volume of goods exchanged between the two countries is carried on Greek owned ships, allowing for the Greek fleet to play a strategic and balancing role in the bilateral trade relationship.

The Chairman, the Regional Head, previous Chairmen but also Governors present offered, each from their own professional background perspective, their views on the importance but also the challenges that Greek shipping is facing and also addressed what each considered as key success factors for the historical and future accomplishments of this industry. 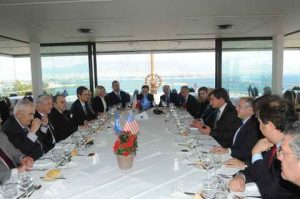 The board of Governors presented to HE Ambassador Pearce the series of Books of Argo Publication Kings of Oceans and wished him a productive and unmemorable stay in Greece.