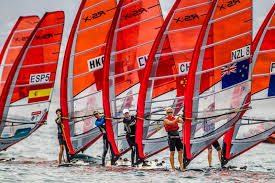 Light breeze on the opening day of racing at the fourth of five 2013-2014 ISAF Sailing World Cup regattas in Mallorca, Spain meant conservative racing for the 1, 130 sailors from 55 nations.

Sailors in one Paralympic and ten Olympic events competing at ISAF Sailing World Cup Mallorca – Trofeo Princesa Sofia ensured that their mistakes were kept to a minimum with fleets split in eight Olympic events.

A light sea breeze came in around 11:00 local time and remained between 5-6 knots with gusts of 7 knots on the seven race courses being used in Palma Bay.

Racing in opening day of the qualification series commenced shortly after 12:00 with many international and national battles that have been evident throughout the 2013-2014 series continuing.

The Argentineans controlled the blue fleet picking up a seventh, a third and first whilst the French stood out in the yellow taking two seconds and a seventh. The Swedes sailed consistently in the blue fleet to add their name to equation.

Despite strong results the Argentineans admitted to sailing with caution on the opening day, “You only have one discard in 11 races, ” explained de la Fuente, “so the most important thing is to be conservative. We are starting conservatively but we are really fast so we’ve managed to get on top after three races.”

With gold fleet racing on his mind Mion added, “We are now thinking about doing something safe on the second day. We know we have to keep our strength for the rest of the regatta because it will be more difficult. Especially in Mallorca where everybody is really close.

“We’ll keep some energy for the third day.”

The Women’s 470 fleet were the first off the water and it was Camille Lecointre and Hélène Defrance (FRA) who came ashore with the brightest start.

Lecointre and Defrance picked up a race win and a fifth from two races and having set the early pace Lecointre was content with her day, “The conditions were not easy. The wind was unpredictable so we just tried to go as fast as we could and guess the shifts so it was okay in the end.”

With 47-boats on the start line the racing has been tough, Lecointre added, “It has been a long time since we raced in a big fleet. It’s not easy when you have a bad start and the level has increased once again.

“With the conditions set to change at the end of the week there’s a long way to go.”

With the discard coming in after two races the French pair share the lead with Ukraine’s Anna Kyselova and Anastasiya Krasko who took the second race win. However the Ukrainians finished down in 18th in the opening race.

Thomas Le Breton (FRA) started strong in the 92-boat Finn fleet with a second place and a bullet to take an early lead.

The Finn fleet is split up into two fleets of 46 boats and Le Breton was the stand out sailor of the day racing in the blue fleet, “I was quite fast today with nice starts, but sometimes you also have to be a bit lucky as well. I just tried to get a good start and have clear air and then stay in the pressure.”

Le Breton finished over a minute behind Race 1 victor Andrew Mills (GBR) in the opening race and enjoyed a close fought second with Tapio Nirkko (FIN), “It was a nice race. I had a good start and I had a nice fight with Tapio. We were both quite quick I think. We had a good gybing battle to keep the inside lane to the last mark, but I managed to keep the lead.”

World #1 Martine Grael and Kahena Kunze (BRA) showed their worth in the 49erFX fleet taking two seconds and a race win.

The Brazilians have been the most active 49erFX racers on the international circuit and continue to produce when it matters. After the opening day they have three points and share the lead with Ann Kristin Wedemeyer and Pia Sophie Wedemeyer (GER) and Sarah Steyaert and Julie Bossard (FRA).

“It’s a great start to the first day of the World Cup, ” said Grael ashore after racing. “We wanted to start the World Cup quite conservatively by not doing an OCS or by getting any letters on our score. That was the key point for the start.

“Tomorrow is also another day of qualification so we will try to have another low risk day.”

Having taken in ten regattas in just 16 months Grael has seen first-hand the progression of some of the girls and continues to push forward herself, “The class is now more than one year old and you can see a big difference between this year and last year. You can see all the teams have been training and working really hard.”

Diego Botin and Pablo Turrado (ESP) lead the 49er fleet after three races. Sailing in the yellow fleet the Spaniards race cool, calm and collected and recorded a fourth, a bullet and a second.

Australian sailors Ashley Brunning and Jeremy O’Connell demonstrated their light wind expertise on the opening day in Mallorca as they occupy the leading positions.

Brunning sits atop of the 144-boat Laser fleet, that’s been split into blue, yellow and red fleets, following a 16th, a bullet and a second. O’Connell follows on four points with a 12th, a first and a third.

Marit Bouwmeester (NED) picked up two race wins and leads the Laser Radial fleet. Racing in the yellow fleet the Dutch sailor took two close victories over Chloe Martin (GBR) in Race 1 and Tina Mihelic (CRO) in Race 2. Bouwmeester finished second in the third race of the day to solidify her leading position. Martin got the better of Bouwmeester in the final race and sits second.

China’s Chunzhuang Liu came out flying on the opening day of Men’s RS:X racing taking bullets from the first two races and adding a fourth in the final race of the day.

The ISAF Sailing World Cup Melbourne silver medallist was devastatingly quick in the light breeze and leads on two points having discarded his fourth.

Natalia Kosinska (NZL) took the days other race win but with two results out of the top ten she is down in eighth.

Franck Cammas (FRA) showed why he is one of the finest sailors in the world at the moment by taking two bullets and a fifth to lead the Nacra 17 with crew Sophie de Turckheim.

The 73 registered Nacra 17’s are split up into two and racing in the blue fleet Cammas and de Turckheim were dominant in the light breeze. Federica Salva and Francesco Bianchi (ITA) remained consistent alongside the French pair in the blue fleet and sit second, a point behind.

Helena Lucas (GBR) opened her regatta up with double bullets in the 16-boat 24mR flee. Compatriot and ISAF Sailing World Cup Miami gold medallist Megan Pascoe trailed Lucas in both of the opening day’s races to pick up two seconds.

Racing resumes at 11:00 on Tuesday 1 April and continues through to Saturday 5 April.

Race Results are available on the ISAF website here http://www.sailing.org/worldcup/results/index.php.

Live Tracking from ISAF Sailing World Cup Mallorca – Trofeo Princesa Sofia will commence on Wednesday 2 April and can be viewed on the ISAF website here http://www.sailing.org/worldcup/multimedia/tracking.php

It’s the fourth regatta in the 2013-2014 ISAF Sailing World Cup Series and will see over 1, 000 Olympic and Paralympic sailors compete off of Playa de Palma, Mallorca, Spain from 31 March to 5 April 2014.